Hugo Chavez and Fidel Castro, a father-son bond until death 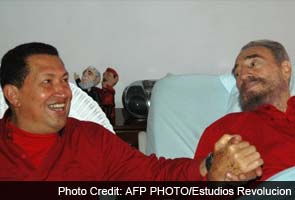 Caracas: In the end, the aging mentor outlived his socialist protege.

Venezuelan President Hugo Chavez, who died on Tuesday at the age of 58, had found a father figure when he struck a lasting friendship with Cuba's 86-year-old retired leader Fidel Castro.

The grey-bearded guerrilla veteran guided the aspiring socialist revolutionary throughout his tumultuous 14-year presidency, and it was in a Cuban hospital that Chavez chose to receive most of his cancer treatment. (Read: Fate of Hugo Chavez's movement in Venezuela uncertain after death)

As his loyal political son, Chavez repaid Castro with a continuing supply of cheap oil that has kept Cuba's anemic economy afloat.

"Fidel to me is a father, a comrade, a master of perfect strategy," Chavez said in 2005 in an interview with the Cuban Communist Party newspaper Granma.

For two decades, the men were the closest of friends, allies and confidants, supporting each other unconditionally, to the point where Chavez once proposed uniting the two countries in a federation, an idea Venezuelan voters squashed in a 2007 referendum.

The friendship angered the Venezuelan opposition, which accused Chavez of giving away money to Cuba while Venezuela's economy sputtered.

The leader of the Cuban revolution first took note of lieutenant colonel Chavez, 28 years his junior, when the army paratrooper led a failed military coup in 1992 against the country's old and worn-out political parties.

The young mutineer spent two years in prison, and when he came out Castro personally invited him to Havana, where he received him at the foot of the plane as if Chavez were a head of state.

Since the triumph of the Cuban revolution in 1959, Castro has paid special attention to Venezuela, because of its oil wealth and because social democratic president Romulo Betancourt had turned it into a showcase for the Alliance for Progress, the US initiative to counter the contagion of the Cuban revolution.

For Cuba, "Venezuela has always been attractive in geopolitical terms because it has what the island doesn't: oil and energy," said Angel Lombardi, a historian and writer.

"Fidel had always bet on exploiting political situations in other countries to influence the region. And a coup leader fit perfectly in that scheme of things," he said.

The ideological convergence between the two men did not happen overnight, but Castro took advantage of the fact that Chavez "had no training and was a politician who accommodated himself to circumstances," Lombardi said.

With Chavez's arrival in power in 1999, the leaders began to see each other frequently, forging an alliance that was closely watched in the region and in Washington.

Venezuela's conservative opposition began to worry as rumors grew of Castro's influence over Chavez. And the two men seemed in perfect sync, playing baseball together or touring this oil-producing country.

"Chavez has to be multiplied by 5,000, by 10,000, by 20,000," gushed Castro, who was soon to hand his young protege the banners of anti-imperialism and hail him as the new leader of the revolutionary left.

Castro's bet on Chavez rapidly paid off. In 2000, they signed an agreement that remains in force today under which Venezuela supplies Cuba with 130,000 barrels of oil a day on preferential terms.

In a communist Cuba that had suffered the loss of huge subsidies after the collapse of the Soviet Union, the aid was a life-saving windfall that quickly made Venezuela Cuba's top trade partner.

Castro was a close advisor after Chavez survived a coup in 2002 and faced a referendum to oust him from office in 2003.

The Cuban leader advised Chavez to launch high-impact social programs for the poor, which lifted the Venezuelan's popularity and enabled him to surmount the recall challenge when it finally came to a vote in 2004.

Chavez used his country's oil bonanza to fund housing, health and subsidized food programs, while Cuba contributed by sending tens of thousands of doctors and volunteers to Venezuela.

Although Castro stepped down from the presidency following surgery in 2006, Cuba's alliance with Chavez has held firm.

That same year, Chavez was re-elected president and coined the slogan "21st century socialism" for his new government, while taking care not to associate it too closely with Cuban-style communism.

The secrecy with which the two governments have managed the relationship is reflected in the absence of official figures on bilateral trade or the size of Cuba's debt to Venezuela.

Promoted
Listen to the latest songs, only on JioSaavn.com
In 2011, it was Castro who personally told Chavez that he had cancer and that Cuban doctors would take charge of his medical care.