Thousands of soldiers and other rescuer workers were scrambling Thursday to reach people cut off by torrents of swirling water or threatened by landslides, as forecasters warned of worse to come. 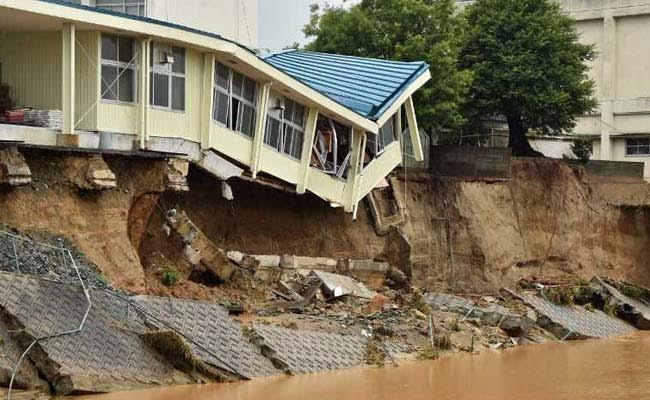 Asakura, Japan: At least two people have been killed and 18 others are missing in huge floods that are surging through southern Japan, with authorities warning hundreds of thousands of people to flee.

Unprecedented torrential rain has caused rivers to burst their banks, sweeping away roads and houses, and destroying schools.

Thousands of soldiers and other rescuer workers were scrambling Thursday to reach people cut off by torrents of swirling water or threatened by landslides, as forecasters warned of worse to come.

"We are in an extremely serious situation," Deputy Prime Minister Taro Aso said, warning of the danger of collapsing hillsides and adding "many people are still missing".

More than 50 centimetres (20 inches) of rain deluged parts of Kyushu, the southernmost of Japan's four main islands, over 12 hours on Wednesday, the meteorological agency said.

Downpours will likely continue through Friday, the agency said as the region grapples with the aftermath of a typhoon that raked the country this week.

"There is a lot of information about people who are unaccounted for," he told a press conference, declining to confirm the number of people missing.

Those included a child reportedly carried off by a fast-flowing river and a couple who had not been seen since their house was swept away.

A man was found dead in the city of Asakura in Fukuoka prefecture, public broadcaster NHK and Jiji Press reported, citing police sources.

NHK and Jiji also reported that a man died in a landslide in Hita, in Oita prefecture, but an official there could not immediately confirm it.

Local officials said in total they knew of 18 people who were missing in Fukuoka and Oita.

Asakura was among the hardest hit with footage showing floodwaters surging through the streets.

(Except for the headline, this story has not been edited by NDTV staff and is published from a syndicated feed.)
Comments
Deputy Prime Minister Taro Asosouthern japan floodChief Cabinet Secretary Yoshihide Suga