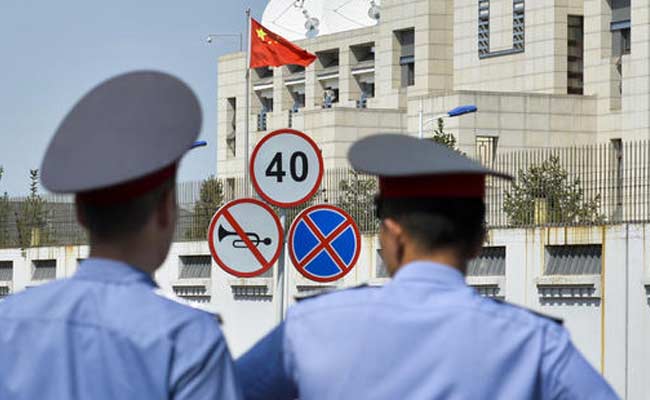 Beijing: The suicide bombing of the Chinese Embassy in Kyrgyzstan on August 30 highlighted the expanding threat of an ethnic Uighur militant group called the East Turkestan Islamic Movement - and the growing Chinese involvement in Syria and Afghanistan to combat it.

The ETIM, also known as the Turkistan Islamic Party, has sought for decades to establish an independent state in China's far west for the repressed Muslim Uighur minority. The group has recently formally pledged allegiance to al-Qaeda and has expanded its global operations, sending at least hundreds of fighters to Syria to wage holy war and carrying out attacks against Chinese overseas targets.

Uighurs (pronounced WEE-gurs) are a Turkic-speaking Muslim ethnic group native to China's far western region of Xinjiang, which was sporadically controlled by Chinese dynasties over the centuries. They have long complained of ethnic and religious discrimination under the majority Han, Communist Chinese government, which has placed restrictions on Islamic dress, education, food and prayer. Several decades of economic development have brought an influx of ethnic Han settlers into resource-rich Xinjiang, marginalizing Uighurs and fueling discontent that culminated in a deadly 2009 riot.

Overseas Uighur groups and analysts have urged China to reconsider heavy-handed policies that could lead to Uighur radicalization, but with little effect. In 2014, China sentenced the economist and Uighur advocate Ilham Tohti to life imprisonment on separatism charges after he made calls for Chinese-Uighur reconciliation and greater economic justice.

The decades-old Uighur separatist movement built its ties with fundamentalist and militant groups in the 1990s, when it settled in Afghanistan under Taliban protection. But both the Taliban and al-Qaida leader Osama bin Laden discouraged the group against attacking China, which they viewed as a shared enemy of the West. The ETIM, considered a terrorist organization by the United States, the EU and other countries, was believed to be pushed into Pakistan's tribal areas after the US-led invasion of Afghanistan, but it moves between the countries' porous border.

After years of existing on the fringes of the global jihadi movement, Uighur militants began to make a name for themselves in 2015 in Syria, where most fought alongside al-Qaeda's affiliate and swayed several key battles against pro-Assad Syrian forces. Both ISIS and al-Qaeda have repeatedly sought to recruit them by highlighting the plight of Chinese Uighurs and condemning China's treatment of Muslims.

On August 30, a man crashed a van packed with 100 kilograms (220 pounds) of TNT into the Chinese diplomatic compound in Bishkek, Kyrgyzstan, killing himself and wounding five people. Kyrgyz officials identified the bomber as Zoir Khalimov, an ethnic Uighur member of ETIM who carried out the attack with support from the Nusra Front, the al-Qaeda affiliate in Syria. In Thailand, a trial began last month for two Uighur men charged with an August 2015 bombing that killed 20 people at a busy Bangkok shrine.

Promoted
Listen to the latest songs, only on JioSaavn.com
The attack came weeks after Thailand forcibly repatriated scores of Uighurs to China, where they faced persecution. Chinese officials said the Uighurs were on their way to fight in Syria when they were arrested.