The fire department in Denton County, Texas, is being praised for rescuing a horse stuck in mud. 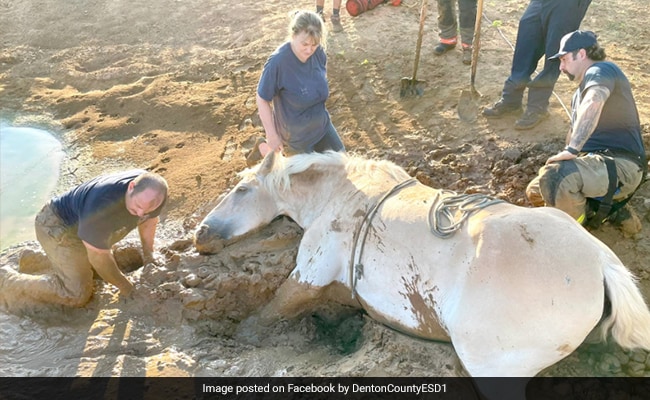 Picture shows horse getting rescued by the fire department officials.

The fire department in Denton County, Texas, is being praised for rescuing a horse stuck in mud. Officials said they received a report just after 7 am on Sunday and arrived at the scene to find the horse resting on its side and unable to get up, according to a report from NBC News.

Pictures from the rescue operation were shared on Facebook by the fire department on Monday. "Yesterday morning, crews from Denton County ESD # 1 and Double Oak Volunteer Fire Department responded to a call in Copper Canyon to rescue a horse that was stuck in the mud. Upon arrival, personnel found a large Belgian draft horse in thick mud up to its belly next to a stock pond. Firefighters dug through the mud and created space underneath the horse to fit ropes to help get the animal out," the department said in the post.

"A veterinarian was on the scene with medication and assisted in taking care of the horse named Bella, who is was still last night with IV fluids, food, and water. Thanks to the team consisting of firefighters, volunteers, veterinarians, and citizens that were involved in this rescue," the post further said.

"Bravo to the rescue crew! Having had a Large Brabant/Shire cross, that was no small feat! Thank you," a user wrote.

Another said, "What an amazing job! WOW! Best wishes for Bella and the kind, hardworking crew."

One firefighter was plunged in the mud up to his waist to save the horse and was suctioned in, injuring his knee, NBC News quoted the officials as saying. Medical officials examined him. Stephen Forrest, Denton County Fire Captain, told the outlet that the collaborative effort of volunteers and officials was successful and life-saving.

"Anything where we have to get together and work as a team and try and solve problems and difficult situations, we enjoy doing that," Captain Forrest said.

"It's Been A Good Formula": Tim Cook Reveals 4 Traits Apple Looks For In Job Candidates