Hong Kong has been shaken by massive anti-government demonstrations since last month, sparked by a proposed law that would have allowed extraditions to mainland China. 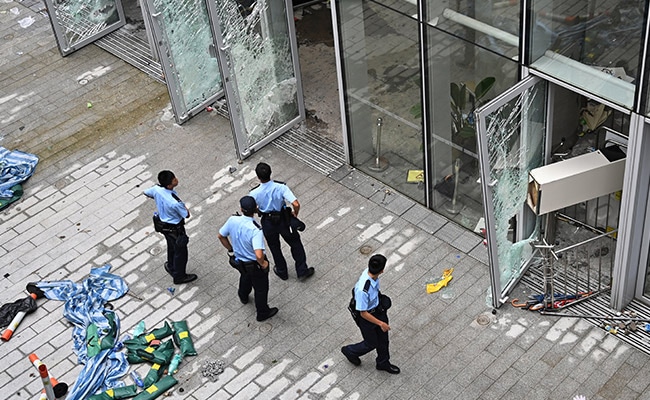 Most of the graffiti remained on the walls, including slogans such as "HK is not China".

Hong Kong authorities vowed Wednesday to hunt down the protesters who stormed parliament in an unprecedented challenge to the Beijing-backed government.

The semi-autonomous city has been shaken by massive anti-government demonstrations since last month, sparked by a proposed law that would have allowed extraditions to mainland China.

China has appeared irked by former colonial power Britain's public rebukes over the protests, and on Wednesday London summoned the Chinese ambassador.

Protesters' anger spilled over on Monday when groups of mostly young hardliners vandalised Hong Kong's Legislative Council. They have demanded the resignation of the city's leader Carrie Lam and cancellation of the extradition bill.

After using a makeshift battering ram to smash their way in, they sprayed graffiti on the walls of the Council's main chamber and defaced the city's seal.

Investigators continued to gather evidence from the damaged building on Wednesday.

"Police will resolutely pursue the protesters for their illegal and violent acts at the complex on July 1," the police said in a statement.

Authorities are analysing DNA samples and fingerprints to identify suspects and are planning raids to arrest them "in the near future", the South China Morning Post reported, citing an unnamed Hong Kong law enforcement source.

Police announced later Wednesday that they had made a dozen arrests linked with a "violent incident" that occurred Monday morning in the Legislative Council vicinity, but did not connect them to the storming of the building.

The escalation on Monday was the most serious in a number of tense face-offs -- some violent -- between protesters and authorities since the pro-democracy campaign began.

Most of the graffiti remained on the walls, including slogans such as "HK is not China".

Some placards placed by protesters in the legislature's main chamber had been removed, an AFP journalist saw during a guided tour of the building organised by the authorities.

Shattered glass was strewn across the floor near panels that the protesters smashed to make their way inside, and some security cameras dangled from the ceilings and walls on wires -- apparently pulled out by protesters.

In one of the main security offices, desks were tipped over and computer screens were thrown on the floor, which was littered with documents and paper.

Makeshift barricades made from metal railings -- which protesters have used to protect themselves from police charges -- were still in some corridors.

Lam, the Hong Kong chief executive, has vowed to carry on, and her declaration that the extradition legislation is suspended has failed to quell anger.

Beijing's irritation with Britain intensified on Wednesday, as China's UK ambassador Liu Xiaoming told a news conference that London must "refrain from further interference" in Hong Kong's protests or risk "further damaging" its relationship with China.

Prime Minister Theresa May earlier said she had raised "concerns" over the protests, after Foreign Secretary Jeremy Hunt warned of "serious consequences" if China breaches a bilateral deal to preserve Hong Kong's freedoms after the city returned to China in 1997.

A Foreign Office source said the Chinese ambassador had been called to discuss the protests on Wednesday.

Doxxing is the online release of a target's personal data, often to shame or incite harassment against them.

The alleged crimes "affected a large number of officers, resulting not only in nuisance but threats", Hong Kong police official Swalikh Mohammed told a news conference, adding that some officers and their family members received death threats.

Mohammed said that there were also failed attempts to take down police websites with Distributed Denial of Service (DDoS) attacks, which involve overwhelming servers with a massive amount of junk requests.

Allegations against the police use of excessive force and unlawful tactics against protesters have fuelled public anger, and protest groups have demanded an investigation.