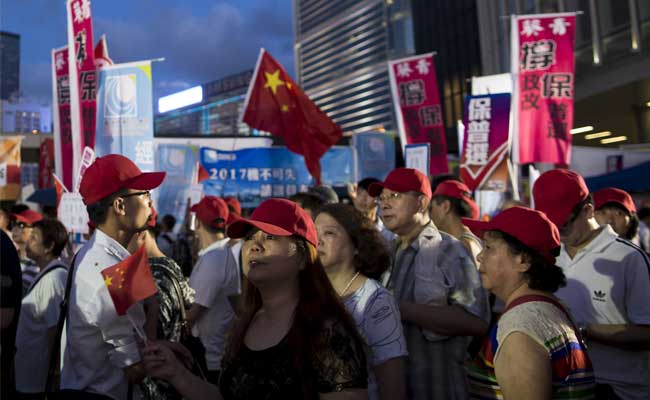 Most pro-government lawmakers staged a walkout as the bill headed for defeat, a move slammed as "farcical" by the opposition and which analysts said could be interpreted as a slap in the face for the current administration.

Just eight lawmakers cast their vote in support of the package, while 28 lawmakers voted against it, including all 27 pan-democrats.

The bill needed the support of two-thirds of the city's 70-strong legislature in order to pass.

Although the Hong Kong government's plan would have given all residents the right to vote for the chief executive for the first time in 2017, it adhered to a Beijing ruling that candidates must be vetted by a loyalist committee.

The proposal was derided as "fake democracy" by opposition lawmakers and campaigners.

The pro-government camp was left in disarray after the walkout.

"We have no idea what happened with the rest of the group suddenly deciding to leave the chamber," said James Tien of the pro-government Liberal Party, whose members stayed to vote for the bill.

The lawmakers left after their request for a 15-minute suspension was rejected by the speaker.

Pro-government legislator Jeffrey Lam said they had requested the delay so that another lawmaker, who had been ill and was running late, could join the vote.

"Those people who were not present in the chamber were supposed to be assisting in running Hong Kong, but if you look at their farcical behaviour you can't help feel sorry for Hong Kong," said a visibly riled Lau.

Political analyst Sonny Lo said the outcome was "embarrassing" for the government.

"They (the lawmakers who walked out) expressed their dissatisfaction not only with the democrats but also with the government and their failure to reach a compromise in this debate," said Lo.

"It illustrates there is a sense of a lame-duck administration."

Civic Party leader Alan Leong said that it would "go down in history" that only eight people supported the bill.

"The message that we are sending to the central people's government and the Hong Kong government is that Hong Kong people do not want to take on this fake democratic package," said Leong.

"We do not want our votes to be used to legitimise an anointment of a chief executive that belongs and is accountable to only vested interests."

Around 100 pro-democracy supporters outside the legislature cheered, punched the air and hugged each other as the result was broadcast live on a big screen.

"An undemocratic proposal should not be passed. It was a proposal that would only benefit those in power."

Hundreds of pro-government supporters, who had been gathered throughout the morning, shouted through loudspeakers to "vote out" the democrats.

"I'm very disappointed that I cannot have my vote (for leader)," said Leung Ting-to, 63, who was standing with the pro-Beijing camp.

"Hong Kong... was given the chance to have universal suffrage, but the democrats took it away."

There is little sign of rapprochement with the Hong Kong authorities saying the reform debate will now be shelved.

"I'm sad, I'm disappointed, I don't know when democratisation can be taken forward," said a grim-faced deputy leader Carrie Lam just ahead of the vote.

"I think in the short-term we cannot see any opportunity or incentive for them to sit together and start up another round of negotiations," said Ivan Choy, a senior lecturer at the Chinese University of Hong Kong.