He's 15, An Independent, And He's Scoring in US Presidential Polls 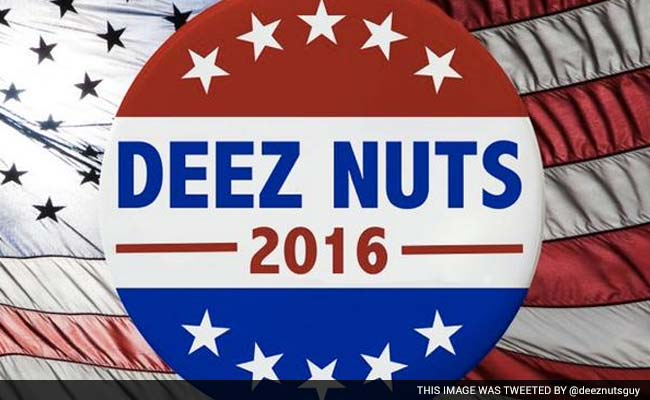 US Presidential Campaign of Deez Nuts

Washington: With all the recent bombast from presidential candidates, it is not unusual that one of these nuts is gaining ground on frontrunners Donald Trump and Hillary Clinton. And by these nuts, we mean "Deez Nuts."

He might sound like someone pranking America, but Deez Nuts is holding his own, polling as an independent at nine percent in North Carolina and eight percent in Minnesota against the biggest names in the 2016 White House race, according to Public Policy Polling.

Deez Nuts is polling at seven percent in his home state, according to PPP, numbers that current back-of-the-packers like Senator Lindsey Graham, Governor Bobby Jindal and former senator Jim Webb would die for.

It might have started off as a joke, but he is no fiction. "Deez Nuts" filed a statement of candidacy with the Federal Election Commission on July 26.

His real name, he confirmed in an email interview Wednesday with Rolling Stone magazine, is Brady Olson. He is starting his sophomore year in high school.

A Mark Olson, who is listed at the Wallingford, Iowa address on the FEC filing, confirmed on Twitter that Deez Nuts is "my 15 year old son."

Deez Nuts has capitalized on the popularity of a juvenile anatomical Internet meme of the same name.

But PPP director Tom Jensen said there is something to be said for the surprise support that independent Deez Nuts has garnered in the short time he has been on the political radar.

"It's just a reflection of how disgusted voters are with the two-party system right now," Jensen told AFP on Thursday, adding that the favorability numbers for Clinton and Trump are in the cellar.

"Any poll we do we find voters overall don't like them," Jensen said.

And so PPP decided "it would be fun" to throw Deez Nuts into the mix.

PPP did not mention Deez Nuts in its main questions about which candidates respondents supported in the group's North Carolina poll earlier this month.

But they then asked: "If the candidates for president next year were Democrat Hillary Clinton, Republican Donald Trump and independent Deez Nuts, who would you vote for?"

Forty per cent chose Trump, 38 per cent Clinton, and nine per cent Nuts. Twelve percent were not sure.

"I really didn't want to see Clinton, Bush, or Trump in the White House, so I guess I'm just trying to put up a fight," Nuts told Rolling Stone magazine in an interview.

Asked how far he was willing to take his practical joke, his response was shrewd: "As far as America wants to take it."

Political reality may ultimately squeeze Deez Nuts out of genuine contention: the US Constitution says no one under age 35 is eligible to be commander in chief.