Weinstein Accuser Testifies Relationship Complicated, But 'He Raped Me'

Jessica Mann's testimony in Harvey Weinstein's rape trial came as the defense pressed her about her continued contact with Harvey Weinstein after he allegedly raped her in March 2013. 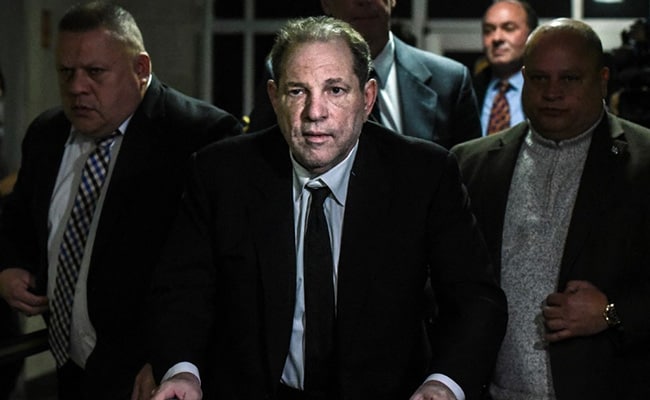 Harvey Weinstein has pleaded not guilty to raping Jessica Mann.

A woman who says Harvey Weinstein raped her told a Manhattan jury on Tuesday that her relationship with the Hollywood producer was "complicated" but said that did not change the fact that he had raped her.

Jessica Mann's testimony in Weinstein's rape trial came as the defense pressed her about her continued contact with Weinstein after he allegedly raped her in March 2013.

The 67-year-old former producer has pleaded not guilty to raping Mann, 34, and to sexually assaulting another woman, Mimi Haleyi. The trial is widely seen as a milestone in the #MeToo movement, in which women have accused powerful men in business, entertainment, media, and politics of sexual misconduct.

Since 2017, more than 80 women have accused Weinstein of sexual misconduct. Weinstein, whose films included "The English Patient" and "Shakespeare in Love," has denied the allegations and has said any sexual encounters were consensual.

Mann said she believed her last sexual encounter with Weinstein was after his mother died in November 2016.

Mann, a onetime aspiring actress, said her contacts with Weinstein continued into 2017, when she emailed him, "I love you, always do. But I hate feeling like a booty call."

Mann was subdued for much of the cross-examination, but toward the end, she began to push back against Weinstein lead lawyer Donna Rotunno.

"I know the history of my relationship with him," she said as the lawyer pressed her about the timing of the events she alleged. "I know it was complicated and difficult. That doesn't change the fact that he raped me."

Rotunno asked that the answer be stricken, but Justice James Burke denied the request.

Mann had testified on Friday that Weinstein raped her in a Manhattan hotel room, early in what she described as an "extremely degrading" relationship. She said the relationship continued in some form for years after that.

Mann's testimony on Monday was cut short after she began weeping uncontrollably as she read aloud an email she wrote in 2014 describing Weinstein as a "pseudo father."

On Tuesday, Rotunno focused on Mann's email correspondence with him following the alleged attack.

In one email in 2013, Mann told Weinstein she had just been through a breakup and was hoping to have dinner with him.

In another email, sent in 2014, Mann asked Weinstein for a referral so she could get a membership at the Soho House, an exclusive club.

Rotunno asked whether Mann wanted the jury to believe that her rapist was the person she reached out to for the referral.

"I do want the jury to know that he is my rapist," Mann said, adding that she hoped to be able to explain her dynamic with him.