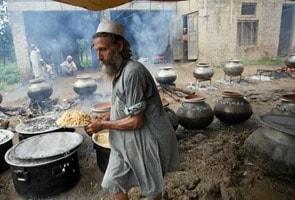 Charsadda, Pakistan: As public anger rises over the government's slow and chaotic response to Pakistan's worst flooding in 80 years, hard-line Islamic charities have stepped into the breach with a grass-roots efficiency that is earning them new support among Pakistani's.

Victims of the floods and political observers say the disaster has provided yet another deeply painful reminder of the anemic health of the civilian government as it teeters between the ineffectual and neglectful.

The floods have opened a fresh opportunity for the Islamic charities to demonstrate that they can provide what the government cannot, much as the Islamists did during the earthquake in Kashmir in 2005, which helped them lure new recruits to banned militant groups through the charity wings that front for them.

In just two districts in this part of the northwest, three Islamic charities have provided shelter to thousands, collected tens of thousands in donations and served about 25,000 hot meals a day a since last Saturday -- six full days before the government delivered cooked food.

"The West says we are terrorists and intolerant, but in time of need, we're the ones serving the people," said Maulana Yousaf Shah, the provincial leader of one of the groups, Jamiat-ulema-e-Islam.

Mian Adil, the vice chairman of another group, Falah-e-Insaniyat, said the aid he distributed at a center in one of the districts, Nowshera, came with a message attached -- "not to trust the government" and its Western allies.

Falah-e-Insaniyat is the charity wing and the latest front for Lashkar-e-Taiba, the group behind the 2008 terrorist attacks in Mumbai, India.

Jamaat-ud-Dawa is the political arm of Lashkar, which the United Nations has listed as a terrorist group.

Under pressure since the Mumbai attacks, Jamaat-ud-Dawa had lowered its profile. But now, at least one of its relief centers in Mianwali, in Punjab, boldly flies its trademark flag, displaying a black sword.

The very visible presence of such groups shows they continue to operate openly from their strongholds in Punjab Province, the nation's heartland, to far-flung corners of the northeast, where they are expanding their legitimacy, and by extension, their ideology.

Their gains come as the United States continues to struggle to win support in the region, despite lavishing billions of dollars in military and civilian aid on Pakistan since 2001 to encourage its help in fighting the Taliban and Al- Qaida.

Some experts predicted that the public resentment of the government generated by the floods could erode support from the military's campaign against the militants, and give a boost to Pakistan's Islamic parties, which remain small but influential.

A 30-year-old tobacco dealer, Gohar Aman, said he got a taste of the nearly complete absence of the government's response when he got in his car on Thursday to search for a relief post he could entrust with an $80 donation.

For 25 miles all he could find were centers run by hard-line Islamic groups, an unsettling option for a man whose brothers are elected leaders of the governing secular party.

Finally, he settled on the Haqqania Madrasa -- a fundamentalist boarding school whose alumni include Jalaluddin Haqqani, who runs the militant network that recruits suicide bombers to strike at coalition forces in Afghanistan from his redoubt inside Pakistan.

The school's leaders, including the director, Maulana Shah, had converted their buildings just off the main road in Charsadda into a dignified homeless shelter providing hot meals, medical treatment and 24-hour electricity to 2,500 flood victims.

"It's our first time here," said Mr Aman, giving a wad of cash to the director. "But we see how comfortable the people are living here, and we can't trust the government."

President Asif Ali Zardari, already deeply unpopular, has come in for stinging criticism for leaving in the middle of the crisis to visit France and Britain as Pakistan grappled with floods that one provincial minister said would set the country back 50 years.

"I don't care if Zardari is in Europe," Main Gul, 50, a laborer who lost his home and two cows, said in an interview. "His government is in Pakistan, but where are they?"

Mr Zardari arrived Friday at the country home of Prime Minister David Cameron of Britain for talks that the Pakistani government said were an important opportunity to smooth over relations after Mr. Cameron recently criticized Pakistan for failing to fight terrorism.
here was no hint that Mr Zardari would cut his trip short to return home, where the floods have affected more than 12 million people, and have killed at least 1,500, according to government and United Nations estimates.

"He would have been remembered and criticized even if there were no floods in the country," Prime Minister Yousaf Raza Gilani said. "I am the chief executive of the country. I am here and my whole cabinet is here to supervise the relief operation, which is our responsibility and not the president's."

But a senior government official, who spoke on condition of anonymity because he was not authorized to speak the news media, said the state was serving only 40 percent of the needs of the people because of a lack of manpower and the vast nature of the catastrophe.

The government is housing tens of thousands of people inside public schools, but a person who lived there said the conditions were so foul that when rice was available they "fight like dogs."

That official relief effort depends greatly on international aid groups and foreign governments, which have donated tens of millions of dollars and provided critical equipment to assist the army's rescue operations.

American helicopters began evacuating people and ferrying supplies this week. But some of the $35 million in aid put up by Washington will come in cash or be channeled through local or international groups, denying the unpopular Americans the chance to improve their image with Pakistanis face to face.

As the rains moved south to Sindh Province on Friday, the senior United Nations official in Pakistan, Martin Mogwanja, said the flooding had left more than 1.5 million people homeless. The United Nations would soon begin an appeal for up to $200 million, he said.

The chaos and inadequacy of the government effort contrasted sharply with the efficiency and reach of the Islamic charities.

Khadim Hussain, an analyst at the Aryana Institute for Regional Research and Advocacy who has studied the expansion of the militant groups, said it was "very alarming" that the Islamic groups had moved so fully into the mainstream.

He warned that a failure by the government to reach the people could lead to a "complete reversal" of public support for the military's campaign against the militant groups that have threatened the state.

In places where foreign and government officials retreated for security reasons, the well-mobilized Islamic charities have consistently been a step ahead and penetrated even remote villages with ease, survivors said.

The Islamic charities sprung into action immediately after the floods hit last week, they said, sending a brigade of 4,000 volunteers in Nowshera, in the Khyber-Pakhtunkhwa Province, to rebuild homes in villages far too dangerous for foreign aid workers to enter.

When asked about the government's slow response, Maulana Shah, the madrasa director, was dismissive. "They're your slaves, so why don't you ask them?" he said, referring to the Pakistani-American ties. He had collected more than $30,000 from private donors since opening the doors of his madrassa, he said.

Officials at one aid center associated with Jamaat-ud-Dawa said that the police tried to dismantle their operation on Tuesday morning as they prepared a breakfast for about 25 flood victims, using an ordinance that prohibited public gatherings without a permit.

The victims protested and pleaded with the police not to shut down a humanitarian service that the government was not providing. They got their way.

Promoted
Listen to the latest songs, only on JioSaavn.com
"They could not put a hand on us," said Farhad Ali, a madrassa teacher who volunteers at the post, "because we were here first and we're the only ones delivering."