The fate of Greenland's ice sheet is of critical importance to every coastal resident in the world, since Greenland is already the biggest contributor to modern-day sea level rise 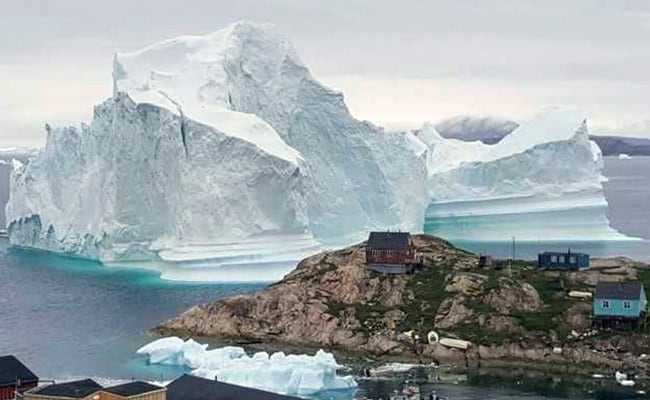 The same heat dome that roasted Europe and broke national temperature records in five countries last week has shifted to Greenland, where it is causing one of the biggest melt events ever observed on the fragile ice sheet.

By some measures, the ice melt is more extreme than during a benchmark record event in July 2012, according to scientists analyzing the latest data. During that event, about 98% of the ice sheet experienced some surface melting, speeding up the process of shedding ice into the ocean.

The fate of Greenland's ice sheet is of critical importance to every coastal resident in the world, since Greenland is already the biggest contributor to modern-day sea level rise. The pace and extent of Greenland ice melt will help determine how high sea levels climb, and how quickly.

Due to both surface melting and a lack of snow on the ice sheet this summer, "this is the year Greenland is contributing most to sea level rise," said Marco Tedesco, a climate scientist at Columbia University.

To illustrate the magnitude of ice contained in Greenland, consider that if the entire ice sheet were to melt, it would raise sea levels by 23 feet. Scientists are using aircraft, field research, satellites and other tools to improve their understanding of how quickly ice is being lost.

Jason Box, a climate scientist who studies Greenland's ice sheet, examined recent field data from two locations on the ice sheet, both of which showed more ice loss so far during this event than in 2012.

The Danish Meteorological Institute tweeted that more than half the ice sheet experienced some degree of melting on Tuesday according to a computer model simulation, which made it the "highest this year by some distance."

However, the peak of this melt event is likely still to come on Wednesday or Thursday.

Xavier Fettweis, a climate scientist at University of Liege, tweeted that a computer simulation suggests the rate of melting will reach a maximum on Thursday, which "could be the highest in Greenland history from 1950."

Already this year, the ice sheet has endured exceptional melting. Between June 11 and 20, the ice sheet lost the equivalent of 80 billion tons of ice, the National Snow and Ice Data Center computed. Melting covered about 270,000 square miles, the most on record so early in the season. Temperatures leaped nearly 40 degrees above normal at the time.

Due to the current record-setting heat dome parked over the ice sheet, which is bringing nearly cloudless skies and temperatures up to 30 degrees above average.

Even the Summit Station weather observatory at the ice sheet's highest elevation (10,551 feet), funded by the National Science Foundation, has exceeded the freezing point.

Christopher Shuman, a climate scientist at University of Maryland Baltimore-County and NASA's Joint Center for Earth Systems Technology, said the temperature at Summit Station topped 32 degrees for at least 8 hours Tuesday, exceeding the warmth during the 2012 melt event "in both magnitude and duration," even surpassing 33.8 degrees (1 Celsius). The temperature may pass freezing yet again Wednesday and "we'll get two straight days of substantial melt," he said.

Tedesco said the overall surface melting on the ice sheet this summer still trails 2012, which saw considerable ice loss continue through August. However, the ice sheet's surface mass balance, which takes into account not only melting but also snow accumulation is "neck and neck" with 2012, Tedesco said.

Given the ongoing melt event, "there is very good chance we will have a record-breaking [low] surface mass balance," Tedesco said. The depleted surface mass on the ice sheet is directly tied to its contribution to sea level rise.

The warmth right now constitutes a spike amidst a longer period of above average temperatures across Greenland, according to John Cappelen of the Danish Meteorological Institute. "July has been warm for the world's largest island, as the months before. Since April temperatures most places have been high with records broken," Cappelen said via email.

Ruth Mottram, a climate scientist with the DMI, says the ongoing melt event appears to be "very significant."

Regarding the longer-term context, Mottram says that preliminary data shows "Every single DMI weather station in Greenland has had a significantly warmer than average July, by 2-3 degrees C depending on where you look - on top of the warmer than average April, May and June."

Looking back even further in time, a study published late last year found that surface melting on Greenland is unprecedented in at least the past 350 years.

The Arctic overall is warming at more than twice the rate of the rest of the globe, which is a trend that has been firmly tied to human emissions of greenhouse gases.