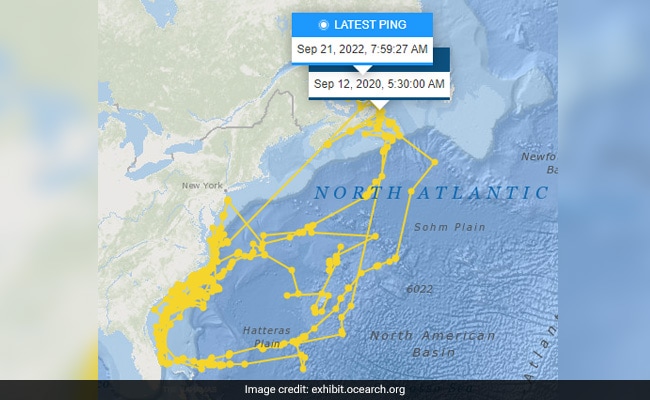 Breton as been travelled along the east coast of the United States.

A 13-foot great white shark named Breton drew a self-portrait in the Atlantic Ocean. Breton was fitted with a GPS tracker and it became the first shark to be tagged during an expedition to Nova Scotia by the charity OCEARCH in 2020, reported Metro.uk.

Breton is a male white shark that weighs 1,437 lb (651 kg) and has been travelled along the east coast of the United States, including New Jersey Virginia, and South Carolina. Whenever Breton surfaces for a long enough period of time, the tag that has been fitted in its dorsal fin transmits a GPS location to shark trackers at the science organisation, said the leading publication.

Interestingly, Breton tracked by the GPS in the span of 444 days has mapped out the shape of a shark.

According to ocearch.org, Breton was first tagged on September 12, 2020 at 12 am in Scaterie Island, Nova Scotia. Its latest Z-Ping was observed on September 18, 2022 at 5:44 am. According to the organisation, Z-Ping is a "Ping" that happens when an animal tag breaks the surface of the water, sending data. It is a ping with no location data.

Breton's most recent ping has been observed on September 21, 2022 at 7:59 am according to the local time just off the coast of Baie de Plaisance in Quebec, reported Metro.UK.

Breton is named for the beautiful people of Cape Breton, where it was tagged, and is the first shark to be tagged as part of OCEARCH's Expedition Nova Scotia 2020. Breton is the fifth shark that OCEARCH has tagged at Scatarie Island in the past two years of doing research there, demonstrating that the area could provide reliable access to white sharks, Ocearch.org said.

The organisation's partnership with SeaWorld, a pioneer in animal rescue, rehabilitation, and crucial ocean health initiatives like OCEARCH's, led to the selection of Breton's name.