The supertanker Grace 1 was seized on July 4 by Gibraltar police and British special forces from the United Kingdom off the overseas British territory. 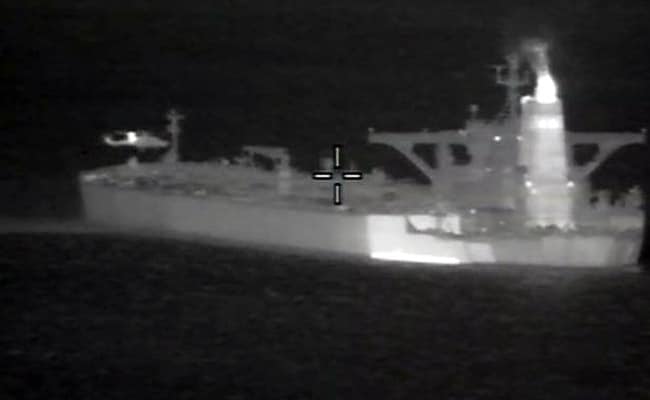 The captain of an Iranian tanker seized in Gibraltar, provoking a diplomatic crisis between Tehran and London, has accused Royal Marines of unnecessary "brute force" when detaining the ship, the BBC reported Tuesday.

The supertanker was seized on July 4 by Gibraltar police and British special forces from the United Kingdom off the overseas British territory.

The ship was suspected of carrying oil to war-torn Syria in violation of EU sanctions.

In an interview with the BBC released Tuesday, the Indian captain, who asked to remain anonymous, said Royal Marines boarded the Grace 1 ship and made his unarmed crew kneel on deck at gunpoint.

In a statement, Britain's defence ministry said it "was a standard boarding that was carried out in full compliance with international rules and norms".

In the interview, the captain said that in the early hours of July 4, he was radioed a police request to board his ship and lowered his ladder.

But he said before anyone could board, a military helicopter landed on the ship and Royal Marines came on.

"How do you come on a ship like this with armed forces and such brute force. For what reason?," he asked. The marines could have simply boarded and told him he was under arrest, he added according to the BBC.

In a statement, police in Gibraltar said the military intervened to support them, "applying the minimum use of force maxim".

The Gibraltar government, meanwhile, said it had evidence contradicting the account of the captain, who has already been questioned.

It said it would make a fuller statement at a later stage "setting out why the evidence now points even more clearly to the destination having been Baniyas," a Syrian refinery.

Iran has strongly condemned the seizure of the tanker.

In what London called a "tit-for-tat" move, Iran's Revolutionary Guards impounded a British-flagged tanker in the Strait of Hormuz two weeks later.

The detention of the 330-metre (1,000-feet) Grace 1 comes at a sensitive time in Iran-EU relations. Iran has announced it will no longer respect some limits set on its nuclear programme as per a 2015 deal, in retaliation for US sanctions.