Prime Minister Narendra Modi's government has signed preliminary agreements with the three U.S. titans and a slew of local businesses. 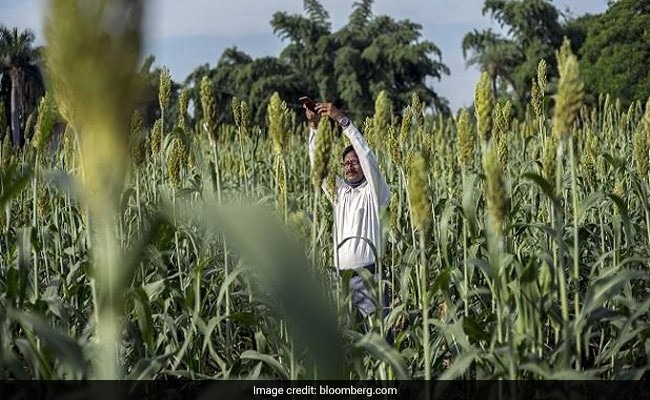 With the project, PM Modi seeks to usher reforms to make over farming sector.

Amazon.com Inc., Microsoft Corp. and Cisco Systems Inc. are among technology giants lining up to harness data from India's farmers in an ambitious government-led productivity drive aimed at transforming an outmoded agricultural industry.

Prime Minister Narendra Modi's administration, which is seeking to ensure food security in the world's second-most populous nation, has signed preliminary agreements with the three U.S. titans and a slew of local businesses starting April to share farm statistics it's been gathering since coming to power in 2014. PM Modi is betting the private sector can help farmers boost yields with apps and tools built from information such as crop output, soil quality and land holdings.

Jio Platforms Ltd., the venture controlled by billionaire Mukesh Ambani's Reliance Industries Ltd., and tobacco giant ITC Ltd. are among local powerhouses that have signed up for the program, the government said this week.

With the project, PM Modi is seeking to usher in long-due reforms to make over a farm sector that employs almost half of the nation's 1.3 billion people and contributes about a fifth of Asia's third-biggest economy. The government is counting on the project's success to boost rural incomes, cut imports, reduce some of the world's worst food wastages with better infrastructure, and eventually compete with exporters such as Brazil, the U.S. and the European Union.

For global firms, it's a stab at India's agritech industry, which Ernst & Young estimates to have the potential to reach about $24 billion in revenue by 2025, with the current penetration being only 1%. It's also a chance to deploy networks, artificial intelligence and machine learning in a developing country, while for e-commerce firms such as Amazon and Reliance, securing a steady stream of farm produce could help crack a groceries market that accounts for more than half of the $1 trillion in annual retail spending by Indians.

"This is a high impact industry and private players are sensing the opportunity and want to be a large part of it," said Ankur Pahwa, a partner at consultancy EY India. "India has a very high amount of food wastage because of lack of technology and infrastructure. So there's a huge upside to the program."

The idea is simple: Seed all the information such as crop pattern, soil health, insurance, credit, and weather patterns into a single database and then analyze it through AI and data analytics. Then the goal is to develop personalized services for a sector replete with challenges such as peaking yields, water stress, degrading soil and lack of infrastructure including temperature-controlled warehouses and refrigerated trucks.

Under the agreement, the big tech companies help the government in developing proof of concepts to offer tech solutions for farm-to-fork services, which farmers will be able to access at their doorstep. If beneficial, firms would be able to sell the final product to the government and also directly to growers and the solutions would be scaled up at the national level.

So far, the government has seeded publicly available data for more than 50 million farmers of the 120 million identified land-holding growers. Some of the local companies that have signed up include Star Agribazaar Technology, ESRI India Technologies, yoga guru Baba Ramdev's Patanjali Organic Research Institute and Ninjacart.

But success is far from guaranteed. The plan to rope in big corporations is already drawing fire from critics, who say the move is yet another attempt by the government to give the private sector a greater sway, a development that could hurt small and vulnerable farmers.

The program may even add fuel to the protracted protests PM Modi's government has been struggling to tackle for more than nine months after controversial new agricultural laws riled up some farmers. With crucial state elections due in 2022, it may get tougher to sell the technology-to-help-agriculture plan to a farming community already suspicious of the government's intentions.

"With this data they will know where the produce wasn't good, and will buy cheap from farmers there and sell it at exorbitant prices elsewhere," said Sukhwinder Singh Sabhra, a farmer from the northern state of Punjab, who has been protesting since November against the new farm laws. "More than the farmers it is the consumers who will suffer."

Technology adoption is still at a nascent stage in India, said Apeksha Kaushik, principal analyst at Gartner. "Limited availability of technology infrastructure and recurring natural phenomena like floods, droughts have also worked against the deployment of digital solutions," she said.

Anxiety over data privacy could be another challenge. Abhimanyu Kohar, a 27-year-old farmers' leader, who has been supporting the protesting farmers, said it's a "serious issue." "We all know the record of the government in keeping the data safe," he said.

Despite the hurdles, a few one-year pro bono pilot programs are already underway.

Microsoft has selected 100 villages to deploy AI and machine learning and build a platform. Amazon, which has already started offering real-time advice and information to farmers through a mobile app, is offering cloud services to solution providers. Representatives at the India offices of Microsoft and Amazon didn't respond to emails seeking comment.

"Once you have the data, you can correlate with on-ground reality and improve your projections, take informed decisions and see which regions need policy intervention," said P.K. Joshi, former director for South Asia at Washington-based International Food Policy Research Institute.

A similar data-driven system implemented in the southern state of Karnataka last year helped increase efficiency in delivery of government benefits, said Rajeev Chawla, the state's additional chief secretary. Some bank loans have even been made to farmers using the centralized data, and all government programs, verification for insurance and loans and minimum support price are being routed through the mechanism, plugging leakages and eliminating frauds, he said.

Besides the tech giants, many smaller companies and startups are likely to join the program. When completed the project will form the core of a national digital agriculture ecosystem to help farmers realize better profitability with access to right information at the right time, and to facilitate better planning and execution of policies, according to the government's consultation paper on digital agriculture.

"How this exercise will translate into action or lead to higher production and farm income, that remains to be seen," said Madan Sabnavis, chief economist at Care Ratings Ltd.