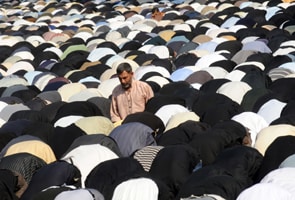 New York: In a survey that its creators are calling purely demographic, and not political, the Pew Research Centre's forum on religion and public life in the United States has estimated the global Muslim population will grow by about 35 per cent in the next 20 years, from 1.6 billion worldwide, to roughly 2.2 billion people by 2030.

The report says a majority will continue to live in the Asia Pacific region (about 60 percent).

The greatest increase is likely in western and northern European countries like Sweden, France, Belgium, Austria and the UK, driven primarily by migration.

Pakistan will surpass Indonesia as the largest Muslim country in the world.

And India will continue to be home to the third largest Muslim population globally.

This may be the first survey of its kind and while it does not reflect dramatic demographic shifts, it is already proving to be controversial for stoking Islamophobia.
Comments
Global Muslim populationPew Research CentreUSIslamophobia