Jeffrey Epstein Told Ghislaine Maxwell In Email She Did "Nothing Wrong"

Ghislaine Maxwell: Among the materials released were email correspondence between the pair in early 2015, including an email in which Jeffrey Epstein told Ghislaine Maxwell she had "done nothing wrong." 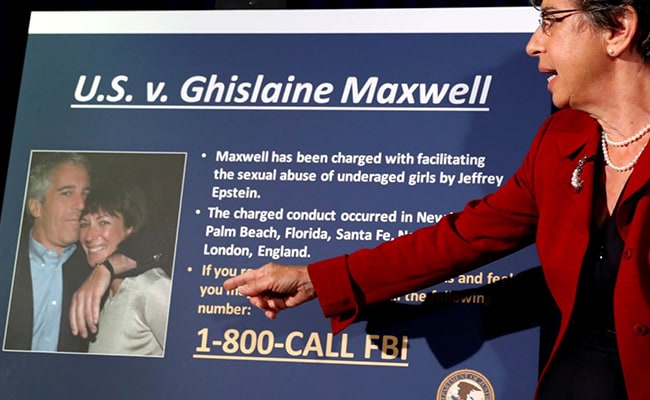 Documents about dealings between Ghislaine Maxwell and Jeffrey Epstein were publicly released on Thursday by a US court, where the British socialite faces criminal charges she aided the late financier's sexual abuse of girls. Among the materials released were email correspondence between the pair in early 2015, including an email in which Epstein told Maxwell she had "done nothing wrong."

US District Judge Loretta Preska had ordered the documents' release by Thursday, saying the public's right to see them outweighed Maxwell's interests in keeping them under seal.

However, two depositions remain under seal after Maxwell filed an emergency motion with the federal appeals court in Manhattan earlier on Thursday to keep them from becoming public. That court has yet to rule, and the depositions will remain sealed until at least Monday.

Lawyers for Maxwell have said that in one of those depositions, filed in April 2016, Maxwell was asked "intrusive" questions concerning her sex life, and that its release could make it "difficult if not impossible" to get a fair trial. The second is a deposition by an unnamed Epstein accuser. Lawyers for Maxwell did not immediately respond to requests for comment after the documents were unsealed.

The cache of documents released on Thursday and the depositions that remain under wraps were part of a now-settled 2015 civil defamation lawsuit against Maxwell by Virginia Giuffre, who said she was underage when Epstein kept her as a "sex slave" with Maxwell's assistance.

A lawyer for Giuffre did not immediately respond to a similar request.

Maxwell, 58, has pleaded not guilty to helping Epstein recruit and eventually abuse three girls from 1994 to 1997, and committing perjury by denying her involvement under oath. She was arrested on July 2 at a home in New Hampshire where prosecutors said she had been hiding out. Maxwell has been held in a Brooklyn jail after a judge denied bail, calling her a flight risk. Her criminal trial is scheduled for next July.

Epstein was found hanged at age 66 last August in a Manhattan jail, while awaiting trial on sex trafficking charges for abusing women and girls in Manhattan and Florida from 2002 to 2005. He had also pleaded not guilty.

Pending appeals by Maxwell, Preska had ordered the release of more than 80 documents in all, including flight logs from Epstein's private jets; and police reports from Palm Beach, Florida, where Epstein had a home. Among the materials released on Thursday were January 2015 emails between Epstein and Maxwell, who were identified respectively as "jeffrey E" and either "Gmax" or "G Maxwell." "You have done nothing wrong and i would [sic] urge you to start acting like it," Epstein wrote on January 25, 2015. "Go outside, head high, not as an escaping [sic] convict go to parties deal with it."

Epstein sent the email a day after Maxwell said she would appreciate it if another woman, identified by a single name only, "would come out and say she was your g'friend - I think she was from end 99 to 2002."

Maxwell's lawyers have sought to distance their client from Epstein in their unsuccessful effort to win bail. In a July 10 bail request, the lawyers said the media had shifted their focus to Maxwell following Epstein's death, "wrongly trying to substitute her for Epstein-even though she'd had no contact with Epstein for more than a decade," had never been charged with a crime or been found liable in civil litigation, and had always denied allegations of misconduct.

Other unsealed materials included emails from Giuffre to the FBI in 2014, including when she expressed interest to the FBI in pursuing a case against Epstein and proving "how much pedophilia occurred by Jeffrey and the many other monsters he obliged w [sic] underage girls."