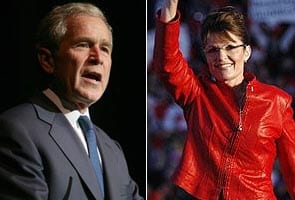 New York: George W Bush has suggested that Republican leader Sarah Palin is "unqualified" and she spoiled the party's 2008 presidential election campaign, a top aide of the former US President has said.

"Naming Palin makes Bush think less of McCain as a man. He thinks McCain ran a lousy campaign with an unqualified running mate and destroyed any chance of winning by picking Palin," a Republican official close to Bush was quoted as saying by the 'New York Daily News'.

Bush suggested that the 46-year-old glamorous former Alaskan governor is not at all qualified to be President and criticised Senator John McCain for picking her as his Running Mate in 2008, the report said.

Promoted
Listen to the latest songs, only on JioSaavn.com
Matt Latimer, former special assistant to Bush, wrote in a book released last year: "'I'm trying to remember if I've met her before. I'm sure I must have'. (Bush's) eyes twinkled, then he asked, 'What is she, the governor of Guam?'" Bush has been disparaging about Palin in the past.