George Floyd, 46, died in police custody in Minneapolis on May 25, when a white officer pressed his knee on his neck for nearly nine minutes. 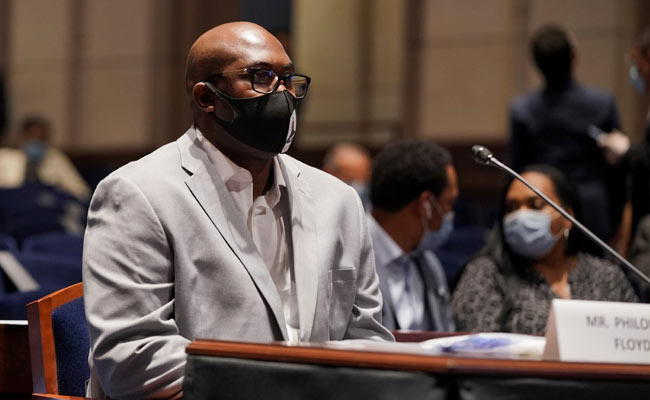 "George called for help and he was ignored," Philonise Floyd said.

The brother of George Floyd, whose killing by police sparked worldwide protests against racism, told the US Congress Wednesday to "stop the pain" by passing reforms to address and reduce police brutality.

One day after burying his brother in Houston, Philonise Floyd appeared in person before a House hearing, where he described the anguish of watching a video of George's death and demanded lawmakers address the systemic problems in law enforcement.

"I'm here to ask you to make it stop. Stop the pain," the younger Floyd said, wiping his forehead and holding back tears.

"I can't tell you the kind of pain you feel when you watch... your big brother, who you looked up to your whole entire life, die -- die begging for his mom," he added.

"George called for help and he was ignored. Please listen to the call I'm making to you now, to the call of our family and the calls ringing out in the streets across the world," said Floyd, who wore an anti-virus mask bearing an image of his brother.

"Maybe by speaking with you today, I can make sure that his death will not be in vain."

George Floyd, 46, died in police custody in Minneapolis on May 25, when a white officer pressed his knee on Floyd's neck for nearly nine minutes.

Video of the shocking abuse went viral, and protests -- some violent, most peaceful -- erupted from coast to coast in some of the most serious US civil unrest in generations.

The testimony came shortly after congressional Democrats unveiled a package of sweeping reforms aimed at reducing systemic racism in US law enforcement.

The legislation seeks to end police brutality in part by making it easier to prosecute officers for abuse, requiring anti-racism training and barring fired officers from working in police forces in other districts.

Choke holds would be made illegal, and lynching would become a federal hate crime.

The House Judiciary Committee's top Republican, Jim Jordan, acknowledged that it was "time for a real discussion" about police treatment of African Americans, in the latest sign that Republicans also want to make changes to the system.

"It's as wrong as wrong can be," Jordan told Philonise Floyd about George Floyd's death, "and your brother's killers will face justice."