Hamas Claims Victory In Conflict With Israel After Ceasefire

Israeli strikes on Gaza since May 10 have killed 232 Palestinians, including 65 children, as well as fighters, and have wounded another 1,900, according to the Gaza health ministry. 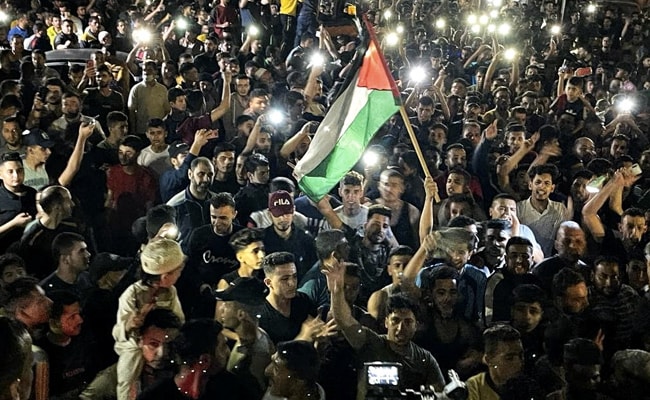 Palestinians celebrate in the streets following a ceasefire. (Reuters)

A senior Hamas figure claimed victory in the conflict with Israel Friday in a speech to thousands of people celebrating in Gaza City after a ceasefire came into place.

"This is the euphoria of victory," said Khalil al-Hayya, the second most senior member of the Islamist movement's political bureau in the Gaza Strip. He also promised to reconstruct homes destroyed by Israeli air strikes.

The ceasefire brokered by Egypt, that also included Gaza's second-most powerful armed group, Islamic Jihad, was agreed on Thursday evening and came into force on Friday after international pressure to stem the bloodshed which erupted earlier this month.

Israeli strikes on Gaza since May 10 have killed 232 Palestinians, including 65 children, as well as fighters, and have wounded another 1,900, according to the Gaza health ministry.

Vast areas have been reduced to rubble and about 120,000 people have been displaced, according to Hamas authorities.

The Israeli army says Hamas and other Islamist armed groups in Gaza have fired more than 4,300 rockets towards Israel over the course of the conflict, but the overwhelming majority of those headed for populated areas were intercepted by its Iron Dome air defences.

The rockets claimed 12 lives in Israel, including two children and an Israeli soldier, with one Indian and two Thai nationals among those killed, the police say.

The conflict escalated after Hamas fired rockets towards Jerusalem after clashes between Israeli police and Palestinian protesters at the Al-Aqsa mosque compound.

Israel launched an air campaign which it said has hit hundreds of military targets in Gaza and killed dozens of commanders, with Israeli Prime Minister Benjamin Netanyahu saying Hamas and Islamic Jihad have been set back "many years".