The altercation flared when Israeli police and domestic security agents pushed past the French detail and were first to enter the Church of Saint Anne, which is French territory under international treaties. 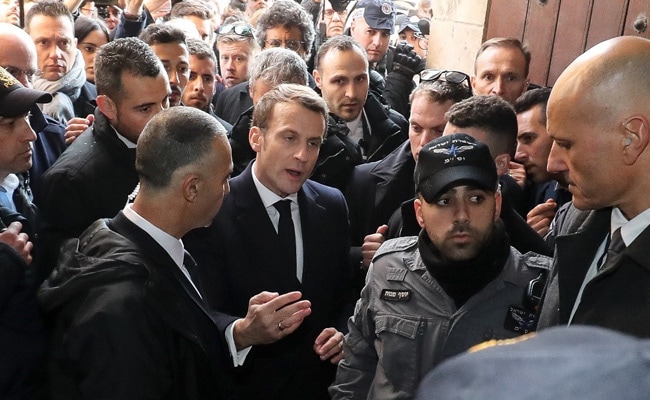 When French President Emmanuel Macron visited Jerusalem's Old City Wednesday, he also walked in the footsteps of one of his predecessors, Jacques Chirac, by engaging in a heated argument with Israeli security.

The altercation flared when Israeli police and domestic security agents pushed past the French detail and were first to enter the Church of Saint Anne, which is French territory under international treaties.

"Everybody knows the rules. I don't like what you did in front of me," an animated Macron told the Israeli personnel, speaking in English, in the crush to enter the building.

"Go out -- outside please!" he added in a raised voice in scenes captured in video footage that quickly spread on social media.

The Roman Catholic church, located at the start of Via Dolorosa in the Old City's Muslim Quarter, has been part of France's territories in the Holy Land since the 1850s.

Macron told the Israeli officers that rules in place "for centuries... will not change with me, I can tell you, OK? So everybody, respect the rules."

Wednesday's tense scenes recalled a 1996 Jerusalem visit by late former president Chirac during which he also grew testy with Israeli security personnel who were urging him to move on.

Chirac heatedly told them their actions were a "provocation" and angrily asked: "What do you want? Me to go back to my plane and go back to France, is that what you want?"

Macron, speaking later Wednesday about his own incident, said there had been "some nervousness between the security teams and I was trying to put it in order", adding that afterwards he "shook hands warmly" with the Israeli officers.

Israel's Shin Bet domestic security agency said in a statement that "in accordance with the pre-established coordination of security arrangements, a police officer and an officer of the Shin Bet accompanied the French president and his men into the church".

"Upon leaving, the president's team apologised for the incident, the president shook hands with the officers and continued his visit to the Old City, accompanied by the security forces in order to ensure his safety as a high-level visitor to Israel."

Macron will on Thursday attend a ceremony to commemorate the liberation 75 years ago of Nazi Germany's Auschwitz death camp in what was then occupied Poland.