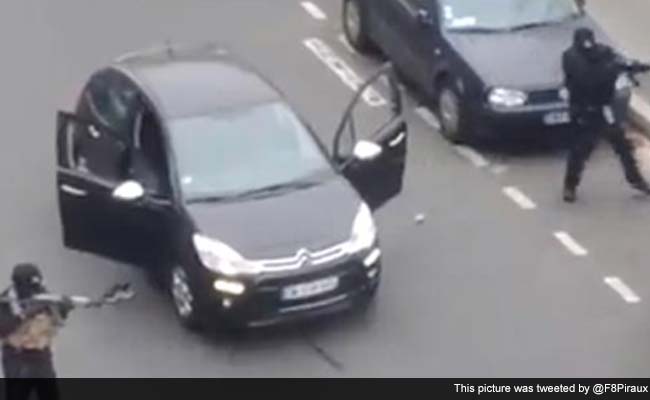 Paris: French police officials identified three men as suspects in a deadly attack against newspaper offices that killed 12 people and shook the world on Wednesday.

Two officials named the suspects as Frenchmen Said Kouachi and Cherif Kouachi, who are brothers and in their early 30s, as well as 18-year-old Hamyd Mourad, whose nationality wasn't immediately clear.

One of the officials said they were linked to a Yemeni terrorist network. A witness of Wednesday's shootings at the offices of weekly satirical newspaper Charlie Hebdo said one of the attackers told onlookers, "You can tell the media that it's Al Qaeda in Yemen."

The officials spoke on condition of anonymity because they weren't authorized to publicly discuss the sensitive and ongoing investigation. No arrests have been confirmed in the hunt for the attackers.

Masked gunmen stormed the offices of Charlie Hebdo, which caricatured the Prophet Muhammad, methodically killing 12 people, including the editor, before escaping in a car. It was France's deadliest terrorist attack in half a century.

Cherif Kouachi was convicted in 2008 of terrorism charges for helping funnel fighters to Iraq's insurgency and sentenced to 18 months in prison.

During Cherif Kouachi's 2008 trial, he told the court, "I really believed in the idea" of fighting the US-led coalition in Iraq. He said he was motivated by his outrage at television images of torture of Iraqi inmates at the US prison at Abu Ghraib.

Promoted
Listen to the latest songs, only on JioSaavn.com
Shouting "Allahu akbar!" as they fired, the men also spoke fluent, unaccented French in the military-style noon-time attack on Charlie Hebdo, located near Paris' Bastille monument. The publication's depictions of Islam have drawn condemnation and threats before - it was firebombed in 2011 - although it also satirized other religions and political figures.

French President Francois Hollande said it was a terrorist act "of exceptional barbarism," adding that other attacks have been thwarted in France in recent weeks. Fears have been running high in France and elsewhere in Europe that jihadis returning from conflicts in Syria and Iraq will stage attacks at home.