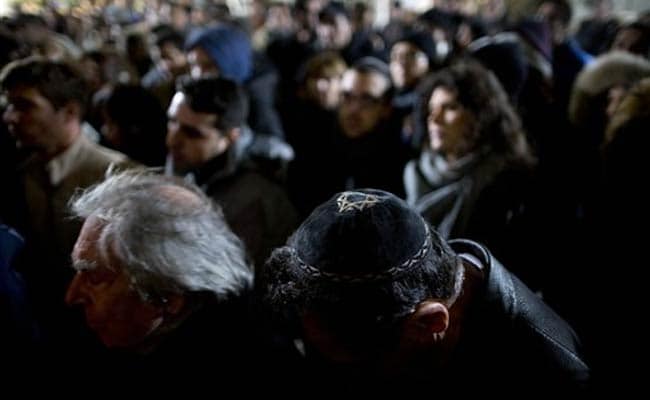 Jews gather to pay tribute to victims of the attack on kosher grocery store in Paris where four hostages were killed on Friday.(Associated Press)

Paris: France will deploy nearly 5,000 security forces and police to protect the 700 Jewish schools in the country, as Prime Minister Manuel Valls said today that the gunman who attacked a kosher supermarket probably had an accomplice.

Amedy Coulibaly, who killed a policewoman in southern Paris then four Jewish shoppers in a hostage drama, probably received help from someone else, Prime Minister Valls said, pledging "the hunt will go on".

Interior Minister Bernard Cazeneuve promised to boost security at Jewish institutions, telling parents of a Jewish school to the south of Paris that soldiers would also be posted as reinforcements.

The Jewish community has been particularly shaken by Friday's attack on the kosher supermarket in eastern Paris, which came just two days after two other gunmen- Said Kouachi and his brother Cherif Kouachi- stormed the offices of Charlie Hebdo satirical weekly, slaughtering 12 people.

Promoted
Listen to the latest songs, only on JioSaavn.com
As it emerged that Cherif Kouachi met Coulibaly in prison, Mr Valls said France would move to isolate Islamist detainees from the rest of the prisoner population, so as to prevent jails from being used as a breeding ground for radicals.

This measure "must become widespread" but "it must be done discerningly and intelligently", he said.