Fire began in Cyprus on Saturday afternoon and has swept through districts in the southern foothills of the Troodos mountains as the country grapples with a blistering heatwave. 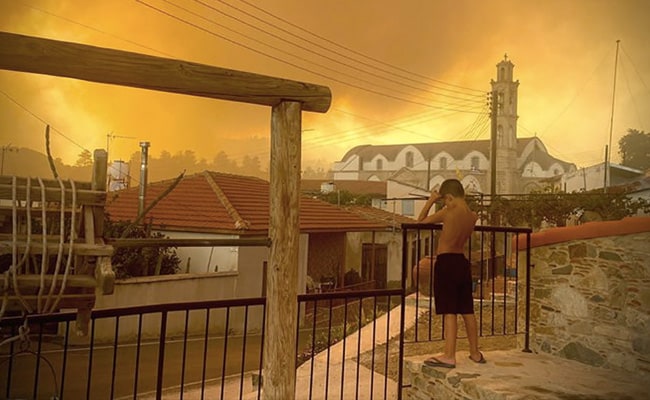 A huge forest blaze in Cyprus has killed four people, destroyed homes and forced evacuations of villages as Greece, Israel and other countries deployed fire-fighting planes to the Mediterranean island.

The fire began Saturday afternoon and has swept through districts in the southern foothills of the Troodos mountains as the country grapples with a blistering heatwave.

"It is a tragedy," President Nicos Anastasiades said on Twitter, describing it as "the largest fire since 1974" when the island was divided after Turkey occupied its northern third.

The blaze had caused "loss of life" and destroyed property and forest lands, Anastasiades said, adding that "the government will provide immediate assistance to the victims and the families of the victims.

"We will not leave anyone abandoned in the destruction of the fire."

Firefighters were successful in bringing the main fire under control on Sunday morning, authorities said, while warning that strengthening winds could yet propel a resurgence.

Interior Minister Nicos Nouris said that four charred bodies were found outside the village of Odos in Larnaca district in what was the "most catastrophic fire since the founding of the Republic of Cyprus" in terms of material damage.

"Forensic examiners are going to the scene for identification," he told reporters on Sunday.

"All the indications support the fact that these are the four missing persons we have been searching for since yesterday," he said, adding that all four are thought to be Egyptian nationals.

The daily Phileleftheros newspaper said their bodies were found about 400 metres (yards) from their burnt-out vehicle.

In areas where the fire had been tamed, charred tree trunks were visible on hillsides, while grey ash had replaced yellowed scrub as far as the eye could see in non-forested areas.

A 67-year-old man was arrested and remanded in custody on suspicion of starting the blaze. He was seen by an eyewitness leaving the village of Arakapas in his car at the same time the fire started there on Saturday, police said.

He could face charges of recklessly causing the deaths of the four people found dead, police added.

Anastasiades visited a crisis management centre in the village of Vavatsinia, located a few kilometres east of the blaze, on Sunday morning, before heading to areas ravaged by the flames, according to the CNA news agency.

He said the area destroyed by fire exceeded 55 square kilometres (21 square miles), adding that the blaze appeared largely contained but could resurge.

"The high temperatures and the wind are our biggest dangers," he said.

"The whole situation is under partial control. What worries us is the possible increase of the winds at noon."

Firefighters were seen along the road leading to Vavatsinia and several helicopters hovered above the fire as a thick grey smoke obscured the sky.

An AFP correspondent in the village of Ora reported seeing several burned out homes.

Janez Lenarcic, European Commissioner for Crisis Management, said on Saturday its "aerial firefighting capacity" had been mobilised, with Italy and Greece sending planes to help.

Two other firefighting planes were scheduled to take off from Israel.

Israel's firefighting authority said that the planes were due to land in Larnaca, where they would join the Italian and Greek teams and also Spanish and British crews.

Britain, which has military bases on Cyprus, deployed two search and rescue helicopters and was helping refuel Cypriot aircraft.

"We stand shoulder to shoulder with the Republic of Cyprus as we work together to overcome this tragedy," said the commander of British Forces Cyprus Major General Rob Thomson.

Cyprus has experienced extended heatwaves and periods of drought in recent years.

In the past few days, the temperature has hit 40 degrees Celsius (104 degrees Fahrenheit) inland and there has been very little rain since mid-April.

cyprus firefire in cypruscasuality in cyprus