The Kentucky-born journalist was the first African-American woman to be granted access to cover the White House, as well as Congress, the Supreme Court and the State Department. 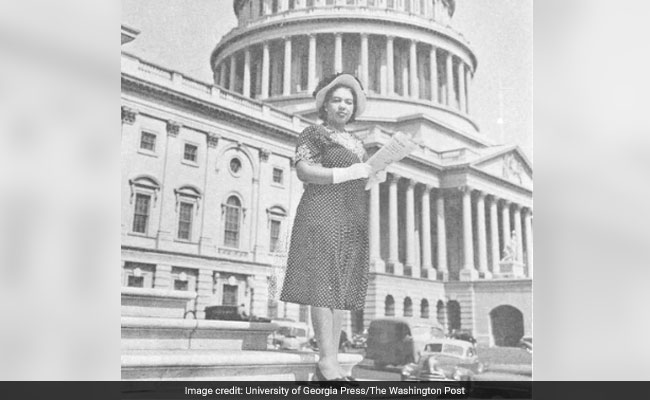 In this handout photo, Alice Dunnigan is pictured on the steps of the US Capitol in 1947.

It was rare to be a woman or African-American covering the White House in the 1940s, and Alice Dunnigan was both.

The Kentucky-born journalist was the first African-American woman to be granted access to cover the White House, as well as Congress, the Supreme Court and the State Department.

Yet even at the height of her career in Washington, she had to pawn her watch every Saturday night so that she would have enough money to eat until her paycheck arrived Monday morning.

It was a "humiliating practice," she wrote in her 1974 autobiography, "A Black Woman's Experience - From Schoolhouse to White House." "I was never allowed more than five dollars on it, just enough for Sunday dinner," she wrote. After pawning it, Dunnigan headed home to her one-room basement apartment in Washington, District of Columbia's Brookland neighborhood, where she shoveled coal for the furnace to get a break on rent.

Dunnigan was the Washington bureau chief for the Associated Negro Press for 14 years, beginning in 1947.

"For black readers of the era, the Associated Negro Press was a combination of CNN, MSNBC and The Washington Post," says Gerald Horne, a professor at the University of Houston and one of the country's foremost historians on racism. "It generated protest and energized organizations in the ongoing struggle against Jim Crow."

By 1940, the circulation of the black press was 1.27 million readers, and that didn't take into account every newspaper issue had multiple readers, according to a book by Horne.

"Nobody in the white press was covering the issues important to black Americans in the 1940s and 1950s. Alice stood up to three presidents, and sometimes they didn't like what she said," said Carol McCabe Booker, who edited Dunnigan's book and republished it in 2015.

Shortly after becoming an accredited White House reporter, Dunnigan wanted to accompany President Harry S. Truman on his tour to the West Coast. No African-American reporter had ever been on such a tour. The cost: $1,000 - over $10,000 in today's dollars. As she recounted in her autobiography, when Dunnigan asked Claude Barnett, founder of the Associated Negro Press, if he would provide the funds, he replied, "Women don't go on trips like this."

Dunnigan ended up paying her own way, and it led to one of her first big scoops: "Pajama Clad President Defends Civil Rights at Midnight."

When the train stopped in Missoula, Montana, in the middle of the night, Truman came out in his robe to talk to hundreds of students waiting for his arrival. One shouted, "Mr. President, what do you say about civil rights?" Truman indicated the issue would be part of his 1948 platform.

Dunnigan later challenged Truman for not issuing an order banning segregation in Washington in 1948 so that African-Americans could attend his inauguration without being barred from hotels and restaurants. Truman refused, "but the idea, like a large stone tossed into a sea of calm, generated a huge ripple of discontent that never subsided until integration in Washington came to fruition years later," Dunnigan wrote in her book.

When Dwight D. Eisenhower became president, he stopped calling on Dunnigan during news conferences for two years because of her questions on civil rights. She would jump up and down, yelling, "Mr. President! Mr. President!" to get Eisenhower's attention but to no avail. "She was iced," Booker said. "But she kept going. She didn't just give up. She went to every news conference."

When John F. Kennedy took office, the silent treatment of Dunnigan ended. About eight minutes into his first news conference on Jan. 25, 1961, Kennedy called on Dunnigan. She asked the president about a dramatic voting rights conflict in Fayette County, Tennessee. White landlords had evicted black sharecroppers for voting, prompted by their rights to do so under the Civil Rights Act of 1957. The situation escalated after the blacks won a lawsuit over the situation.

Kennedy responded to Dunnigan's question by saying, " . . . the Congress of course enacted legislation which very clearly placed responsibility on the executive branch to protect the right of voting. I . . . supported that legislation. I am extremely interested in making sure that every American is given the right to cast his vote without prejudice to his rights as a citizen, and therefore I can state that this administration will pursue the problem of providing that protection with all vigor."

Dunnigan was born in 1906 in Russellville, Kentucky - two years before the lynching of four black men in her hometown. Historian Michael Morrow says the terror of the lynching hung over the small town for decades.

"I think this community put a lot of fight in Alice," Morrow said. "You almost had to jump out the womb fighting here if you hoped to make it. She understood young enough that she would have to chart her own course."

The historian said that even though people in Washington did not accept her, Dunnigan persisted no matter what because "she knew she was fighting battles for her entire race."

Morrow has spent three decades attempting to make her as well known as other civil rights figures, and those efforts are paying off.

A bronze statue of Dunnigan will appear from Sept. 21 to Dec. 16 in Washington at the Newseum. The 6-foot-tall, 500-pound bronze statue, made by Kentucky sculptor Amanda Matthews, portrays the reporter clad in one of a handful of her good dresses and scuffed pumps. She holds a 1947 copy of The Washington Post with headlines about civil rights. The statue is based on a photo of Dunnigan standing on the steps of the U.S. Capitol in 1947.

"It is my fondest hope," Dunnigan wrote in her book's preface, "that the story of my life and work will . . . encourage more young writers to use their talents as a moving force in the forward march of progress and that their efforts will soon result in giving Americans the kind of nation that those of my generation so long hoped and worked for."

(Except for the headline, this story has not been edited by NDTV staff and is published from a syndicated feed.)
Comments
Alice DunniganAlice Dunnigan White House Reporter