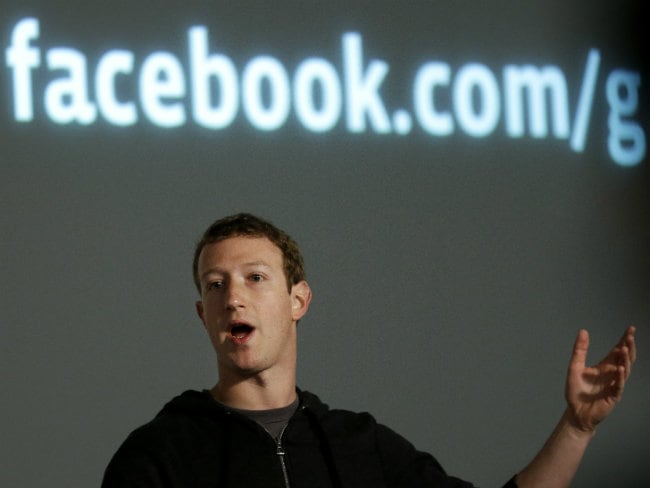 Washington: Facebook's move to fulfill its ambition to be the personal "newspaper" for its billion-plus members is likely to mean more woes for the ailing news media.

The huge social network has become a key source of news for many users, as part of a dramatic shift in how people get information in the digital age.

Company founder Mark Zuckerberg told a forum in early November that his goal is to make Facebook's newsfeed "the perfect personalized newspaper for every person in the world."

Zuckerberg said that while a newspaper provides the same information to every reader, Facebook can tailor its feed to the interests of the individual, delivering a mix of world news, community events and updates about friends or family.

"It's a different approach to newspapering," said Ken Paulson, a former editor of USA Today who is now dean of communications at Middle Tennessee State University.

"It's neither good nor bad, but it's something a traditional newspaper can't do."

With Facebook, editorial decisions about what members see are made not by a journalist, but an algorithm that determines which items are likely to be of greatest interest to each person.

This may concern the traditional journalism community, but even some media experts acknowledge that Facebook appears to be able to deliver more of what people want to see, in an efficient way.

"It's intimate, it's relevant, it's extraordinarily timely and it's about you. That's more than any newspaper can do," said Alan Mutter, a former Chicago daily newspaper editor who is now a consultant for digital media ventures.

Mutter said that as newspapers cling to their "ancient" business model, organizations like Facebook are making the news more personal.

And he said the trend will continue as younger readers shun print in favor of digital and mobile platforms.

"Facebook has all the data to tell you what all of your friends are reading, so you have a better chance of seeing things that you are interested in," she said.

"The reason Facebook has so many engineers and data scientists is to continually make the algorithm better. The algorithm gets stronger as more people use it."

Facebook is a source of news for at least 30 per cent of Americans, and a major driver of traffic to news websites, according to a Pew Research Center study.

This gives the social network enormous power over the news media, which is increasingly dependent on traffic from Facebook and other social platforms.

Even though Facebook is known for its computer coding, it still must make editorial decisions, Usher points out.

"What's scary is how reactive a position it puts news organizations, which are trying to guess Facebook's next move," she said. "That's a lot of power to put in a single organization."

Facebook, Google and other tech firms jealously guard their algorithmic formulas. But observers note that a single tweak of that formula can have important consequences for news organizations.

"News organizations are trying to build their strategy around trying to guess the algorithm, and ultimately that's a losing strategy," Usher said.

But with traditional news media hurting, it remains unclear how the industry can support the kind of journalism needed to keep people informed as it has in the past.

Mutter said what people read may change -- it may be sponsored or subsidized in a way that may or may not be transparent.

"It won't necessarily be real journalism, but it will be content," he said.

Paulson said that while Facebook can deliver much of the information from newspapers, "it would be hard pressed to capture the soul" of traditional print news.

"Freedom of the press was established to keep an eye on people in power and inform the community," he added. "There's a tremendous public spirit component that you can't address with an algorithm."

Promoted
Listen to the latest songs, only on JioSaavn.com
Paulson said that while Facebook is a useful platform for sharing, it will not underwrite the kind of investigative journalism upon which newspapers often pride themselves. With journalism retrenching, that weakens the entire democratic process.

"We get the kind of news we deserve and are willing to pay for," Paulson added.