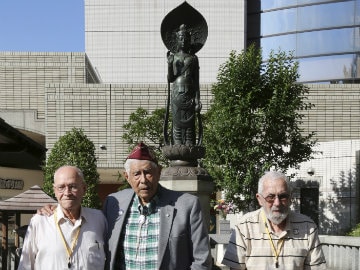 Tokyo, Japan: The prisoners of war held in Tokyo's Omori POW camp saw some of the most horrific destruction during the last months of World War II, as American B-29 bombers dropped incendiary bombs that obliterated much of the city.

But in those hungry times, they also were among the luckiest, says Bill Sanchez, 96, who along with two other former prisoners visited on Thursday the Heiwajima Kannon, a statue of the Goddess of Mercy built near the site of the former POW camp to mourn the war dead.

Like many other POWs held in Omori, Sanchez was put to work loading and unloading cargo on the docks.

"Which was great work because we had a lot of opportunities to pinch food. We learned real quick," said Sanchez, of Monterey Park, California, who watched as American fire bombs incinerated nearby neighborhoods.

The Omori camp's barracks once occupied nearly half of a tiny island reclaimed from Tokyo Bay with help from prisoners like Sanchez. Today Heiwajima, or Peace Island, is barely distinguishable from the rest of Tokyo. The camp's former site is now a boat racing venue surrounded by bland office buildings.

Seven former POWs, all in their 90s, are visiting Japan at the invitation of the Japanese government under a program that started five years ago.

Oral C. Nichols, 93, of Carlsbad, New Mexico, was working in construction on Wake Island in the Pacific when the Japanese took the island in 1941, capturing 5,000 prisoners. By the time the war ended, he had been moved to Shanghai and then to an open pit iron mine in northern Japan.

"But also I was young and had set myself a goal to live, that I was going to live regardless," Nichols said.

Jack Schwartz, 99, of Hanford, California, was a civil engineering graduate of the California Institute of Technology when he enlisted in the Navy Civil Engineer Corps in 1940. Taken prisoner in Guam, he spent much of his imprisonment at the Zentsuji Camp, a "showcase" camp on western Japan's Shikoku island.

Still, he said, "In four years, I never had a good meal."

"I arrived two days ago and had my first good meal ever in Japan," he said in a talk by the group at Tokyo's Temple University on Wednesday.

Like the other former POWs, Schwartz marveled at Tokyo's progress since Japan's surrender in August 1945, especially high-tech toilets equipped to warm, wash and dry.

"I sat down on a toilet seat and it was warm!"

During the war, the Japanese held over 30,000 allied force members as prisoners in dozens of camps in Japan, China and elsewhere in Asia, according to the POW Research Network Japan.

The former POWs said they understood that the cruelty and brutality they experienced during the war had much to do with the times.

One of 91-year-old Darrel Stark's most vivid memories is of a supervisor in the prison camp at Yokkaichi, a copper smelting center in western Japan, who did not retaliate when Stark and another prisoner stole his lunch.

Promoted
Listen to the latest songs, only on JioSaavn.com
"He came the next day with two lunches, 'One for you, and one for me,'" said Stark, of Stafford Springs, Connecticut. "If he had reported me, I wouldn't have been speaking to you tonight."