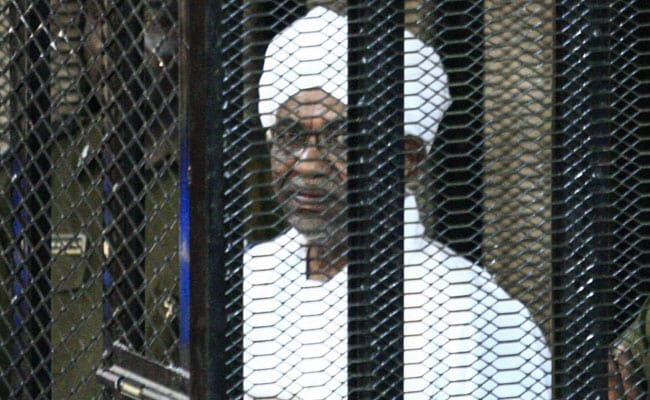 Omar al-Bashir said that "the funds were not used for his own private interest but as donations".

A Sudanese court on Saturday charged ousted president Omar al-Bashir, on trial for corruption, with illegal acquisition and use of foreign funds, offences which could put him behind bars for a decade.

Judge Al-Sadiq Abdelrahman said at the third session of Bashir's trial that foreign funds of multiple currencies were found at his home.

Authorities had "seized 6.9 million euros, $351,770 and 5.7 million Sudanese pounds at (Bashir's) home which he acquired and used illegally," the judge said.

Bashir, wearing a traditional white gown and headdress and seated in a metal cage, admitted to receiving the equivalent of $25 million from Saudi royals.

"My office manager... received a call from the office of Saudi Crown Prince Mohamed bin Salman saying he has a 'message' that will be sent on a private jet," Bashir said during the trial.

"We were told that the crown prince did not want his name to appear (linked to the transaction)... and if the funds were deposited with Sudan's bank or the finance ministry, the source would have to be identified," he said.

The former president, 75, also said that "the funds were not used for his own private interest but as donations".

The judge said illegal acquisition of wealth was punishable by up to 10 years in jail, while illicit use of foreign funds carried up to three years.

An investigator had previously told the court that Bashir received $90 million in cash from Saudi royals.

Hashem Abu Bakr, Bashir's defence lawyer, said Saturday his client was "not guilty" and that witnesses would be brought to court.

The trial was adjourned until September 7, said an AFP correspondent who attended the session.

Bashir was ousted in April after mass protests against his three-decade rule rocked Sudan for months.

Sudan has embarked on a transition to civilian rule following a power-sharing deal signed on August 17 by protest leaders and the generals who ousted Bashir.

Protesters have called for Bashir to face justice not just over corruption but for his role in the country's deadly conflicts.

The former Sudanese leader is wanted by the International Criminal Court in The Hague over his role in mass killings in the western region of Darfur.

"Now is the time for the people of Sudan to choose law over impunity and ensure that the ICC suspects in the Darfur situation finally face justice in a court of law," ICC prosecutor Fatou Bensouda told the UN Security Council in June.

Sudan's prosecutor general has said Bashir would also be charged over the killings during the anti-regime protests which eventually led to his ouster.

(Except for the headline, this story has not been edited by NDTV staff and is published from a syndicated feed.)
Comments
Omar al-BashirSudan