The monument is made of aluminium and it is crafted by Canadian metal sculptors Kevin and Michelle Stone. 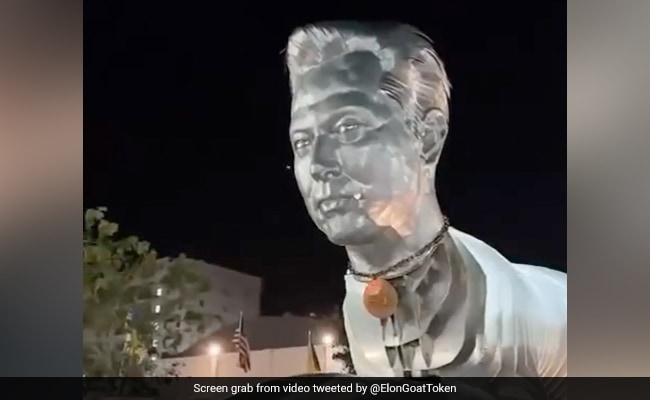 The piece was conceptualised and commissioned by Elon GOAT Token

Fans of Tesla CEO Elon Musk have created a 30-foot-long monument of their 'hero'. The 5 feet 9 inches tall piece is worth $600,000 and it seems the billionaire's head is fixed atop the body of a goat that is riding a rocket.'

The monument is made of aluminium and it is crafted by Canadian metal sculptors Kevin and Michelle Stone. The piece was conceptualised and commissioned by Elon GOAT Token ($EGT). According to reports, they intend to present the statue to Musk at his Tesla workplace on November 26 in Austin, Texas.

In a statement, $EGT said, "Most people thought we would never do it, but after one year of building the time has come to bring it home to Elon. Really we just want to meet the guy and give it to him. After all, he is the most innovative human alive, hence the GOAT - Greatest Of All Time."

"We built Elon Musk a $600,000 monument on the back of a semi-trailer in honour of his many accomplishments and commitment to Cryptocurrency," the statement adds.

Hey @elonmusk are you ready to get your present? $600k monument by your friends from @elongoattoken@voltinu November 26 in Austin, TX⚡️🐐⚡️❤️ pic.twitter.com/Ghy5FCN4nj

Since completion, $EGT has toured several states in the US and has now decided to deliver this gift to Elon at Tesla's Giga factory in Austin, according to the company's website.

Meanwhile, Elon Musk officially launched the pay-for-verification system after taking over as the new boss of Twitter, and some users are already misusing it.

The new Twitter Blue subscription comes with a blue tick nearly identical to those assigned to celebrities. If a user is scrolling through the feed, the new tick looks exactly the same. The difference emerges when users click on the badge, they will get to know if it's given to a notable person or paid for but a Twitter Blue subscriber.