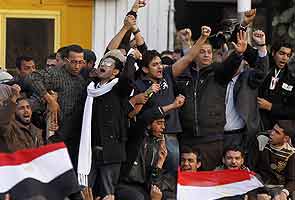 Cairo: Egyptian Islamists have clashed with opponents of a draft constitution in the Mediterranean city of Alexandria after an ultraconservative cleric called on worshippers to approve the charter in a referendum.

Witnesses say a number of people were injured as the fighting spread from the mosque where Friday prayers were held to main roads. Witnesses say extremist supporters of the constitution brandished swords while the opposition hurled stones after the sermon by the Salafi cleric. At least two cars also were set on fire.

Promoted
Listen to the latest songs, only on JioSaavn.com
Religious authorities had issued orders that mosques should not be used to manipulate Saturday's vote, but several clerics, especially in conservative southern areas, took to the pulpit to tell their congregations that voting in favor of the constitution is seeking victory for Islam.