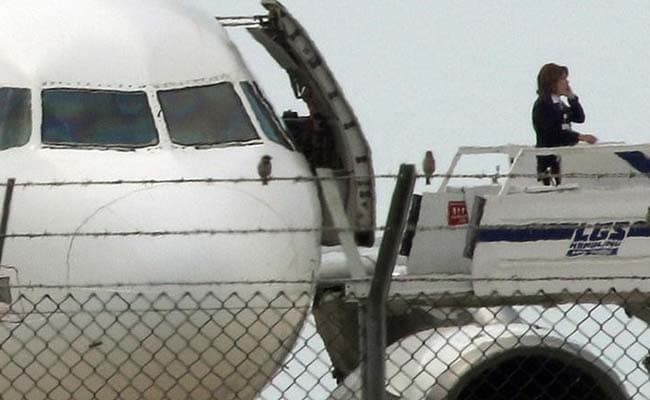 EgyptAir flight MS 181 was flying from the northern Egyptian city of Alexandria to the capital, Cairo.

CAIRO: An Egyptian commerical airliner carrying dozens of passengers and several crewmembers was hijacked by a passenger who threatened he had an explosive belt and forced to land in Cyprus Tuesday, according to the country's civil aviation authority.

The Egyptian Foreign Ministry said the hijacking was not terrorism-related.

EgyptAir flight MS 181 was flying from the northern Egyptian city of Alexandria to the capital, Cairo, and was scheduled to land at 7.15 am. Instead, the plane was diverted to Larnaca, Cyprus, and there were suspicions of a bomb aboard, a Cypriot government official said.

EgyptAir tweeted that its flight was "officially hijacked." Later, it tweeted that "negotiations . . . resulted in the release of all the passengers, except the crew and four foreigners."

Cyprus' president said the hijacking incident was "not something which has to do with terrorism." Nicos Anastasiades said the government of Cyprus was doing its utmost so that all passengers on the EgyptAir flight are safe. He spoke on the sidelines of a meeting Tuesday with the president of the European Parliament.

Sherif Fathy, Egypt's minister of aviation, told a press conference hours after the hijacking that the hijacker was still holding seven hostages, including the pilot's captain, his assistant, one stewardess, a security officer and three passengers.

He said several parties were trying to negotiate with the hijacker. He angrily declined to answer a question about security concerns at Egyptian airports.

Fathy said the pilot and hijacker had a discussion over whether to fly to Turkey or Cyprus, and decided on Cyprus, apparently because the plane did not have enough fuel to reach Turkey. He said it was unclear whether the hijacker was actually wearing an explosives belt, as originally reported. "It could be a fake one," he said.

Passengers were seen disembarking in waves from the Airbus at Larnaca airport carrying luggage. Some appeared to be wearing crew uniforms.

An Egyptian civil aviation authority spokesman told the Washington Post there were 56 people on board, including 30 Egyptians, 11 Italians, 8 Americans, two Belgians, two Greeks, a French citizen and a Syrian. He declined to comment further.

EgyptAir initially said there were 88 passengers on the plane.

Spokespeople from the U.S. embassy and the British Foreign Ministry in Cairo said they were working to establish whether any of their nationals were on board the hijacked flight.

The hijacker was initially named as Egyptian national Ibrahim Samaha, an Egyptian university professor. But Samaha told BBC Arabic he was not the hijacker, but merely a passenger on the plane.

"We did not know what was going on," he told the BBC. "We got aboard the plane and we were surprised that the crew took all our passports, which is unusual for a domestic flight. After a while we realised that the altitude is getting higher. Then we knew we were heading to Cyprus. At first the crew told us there was a problem with the plane, and only later we knew it was hijacked."

Cypriot media said the hijacker wanted to see his ex-wife, who lives in Larnaca. The woman was said to be on her way to the airport, according to local media reporters.

Reports said the hijacker threatened the pilot with an explosive during the flight.

If the hijacker was able to get on the flight with an explosives belt or other kind of arms, it would be a major embarrassment to the Egyptian government and highlight the lingering concerns among aviation authorities and analysts of the country's poor security at airports.

The hijacking arrives as militant attacks in Egypt have surged in recent years, driving tourists and foreign investors away as the government struggles to revive the economy.

Egypt's American-backed military is battling an Islamic State affiliate in the country's northern Sinai Peninsula. In October, a Russian passenger plane was brought down over the Sinai by a bomb planted aboard, an attack that was claimed by the Islamic State.