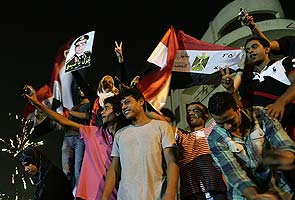 Cairo: A group of leading Egyptian activists on trial for inciting violence during protests against former President Mohamed Morsi were acquitted on Sunday by a court in Cairo, state news agency MENA reported, days after Morsi was ousted by the armed forces.

The eleven defendants - including Alaa Abdel Fattah, Ahmed Douma, and Nawara Negm - were outspoken critics of Morsi and his Islamist movement, the Muslim Brotherhood, and activists said their case was part of a wider crackdown on dissent.

Morsi was toppled by the military on Wednesday, a year after he became Egypt's first freely elected president, following mass protests against him amid economic stagnation and fears of a power grab by the Muslim Brotherhood.

Morsi's ouster was met with jubilation by many Egyptians but angered Islamists. In mass protests on Friday, more than 30 people were killed and 1,400 wounded.

MENA said a criminal court in Cairo cleared the activists of stirring up violence and destroying public property. The charges related to a clash in March with Brotherhood supporters outside the Islamist group's headquarters that left 130 people wounded.

"There was never a shred of evidence against Douma or the others. Their arrest was part of an attempt by the Brotherhood to silence its critics. Thankfully that era is over now," Douma's lawyer, Ali Soliman, told Reuters.

Douma, a high-profile blogger and activist, was released from prison on Saturday on orders of the public prosecution.

In a separate case against him, he had been sentenced to six months in prison for calling Morsi a criminal and a murderer in media interviews.

Promoted
Listen to the latest songs, only on JioSaavn.com
Since Morsi's overthrow, authorities have arrested prominent Brotherhood members and shut down several television stations perceived to be sympathetic to the group.