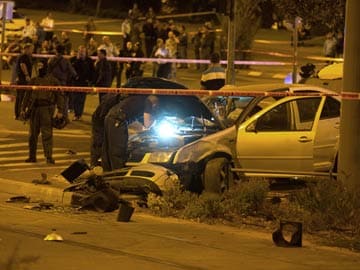 Israeli policemen inspect a car after it rammed a group of pedestrians. (Agence France-Presse)

Jerusalem: An Ecuadoran woman died on Sunday in an Israeli hospital, four days after being injured when a Palestinian rammed a car into pedestrians in Jerusalem, taking the death toll to two.

"We will reject violence from wherever it comes," he wrote on Twitter, expressing his solidarity with the woman's grieving relatives.

Mosquera was a "victim of intolerance and violence in the Middle East," the Foreign Ministry said in a statement.

"Ecuador expresses its strongest rejection and condemnation of the attack that occurred on October 22, 2014 in East Jerusalem. The Barrera Mosquera family and our entire nation is in mourning."

The victim's mother, Rosa Barrera, and her sister Priscilla arrived in Tel Aviv on Saturday, according to the ministry.

Mosquera, who the Ecuadoran foreign ministry said was completing the process of converting to Judaism, had been treated at the Jerusalem Hadassah hospital.

Promoted
Listen to the latest songs, only on JioSaavn.com
The other person killed in what the Israeli police called a "terrorist attack" was a three-month-old girl.

Abdelrahman Shaludi, 21, had driven his car into the Jerusalem crowd before being shot dead by police when he attempted to flee the scene on foot. His funeral was held later Sunday.