In July 2012, a little over a year after peaceful anti-government protests launched into a full-scale uprising, Free Syrian Army (FSA) rebels attack the capital from Ghouta. 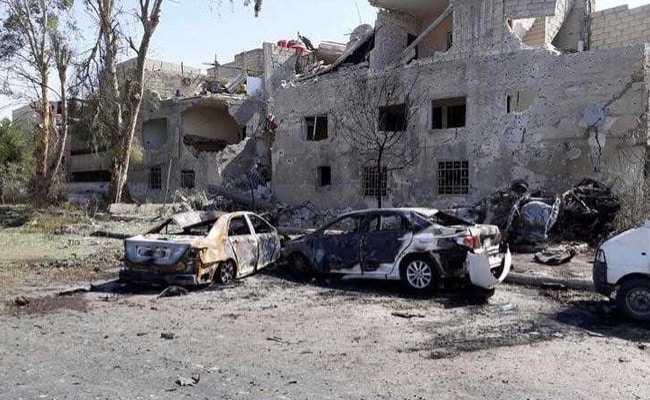 Here is a summary of events in the rebel enclave, home to around 400,000 people, since the start of the Syrian conflict.

Battles, bombings, escalation
In July 2012, a little over a year after peaceful anti-government protests launched into a full-scale uprising, Free Syrian Army (FSA) rebels attack the capital from Ghouta.

Regime forces quickly reassert control, but some areas fall to rebel groups, who set up base in Eastern Ghouta.

The region becomes the target of regular bombings and artillery strikes: markets, schools and hospitals are hit.

By 2013, Eastern Ghouta is under a strangulating regime siege, slashing access to food, medicine, and other goods.

Under a May 2017 deal between rebel backer Turkey and regime allies Russia and Iran, the region is declared one of four "de-escalation" zones.

But the government maintains its blockade and renews bombardment in mid-November, pulverising buildings and streets.

In early February 2018, a wave of intense bombardment leaves around 250 civilians dead and hundreds wounded in five days.

The regime launches an even more ferocious assault on the enclave on February 18, killing more than 800 civilians and taking more than 40 percent of the territory within two weeks.

According to an AFP correspondent in the enclave's main town Douma, the landscape is devastated.

In August 2013 hundreds of people, including many children, are killed in a suspected toxic chemical attack on the region and another rebel bastion near Damascus, Moadamiyet al-Sham.

US and French strikes are averted only after a last-gasp agreement between the US and Russia, demanding the destruction of Syria's chemical weapons arsenal.

On February 5, US ambassador Nikki Haley tells the UN Security Council that there is "obvious evidence from dozens of victims" to prove the chlorine attacks.

Malnutrition, siege
Eastern Ghouta was once the breadbasket of Damascus, providing rich harvests of apricots and vegetables to the capital.

But siege and bombing have sparked crippling shortages of food and medication. Some food is still grown locally or smuggled in, but prices are soaring.

Following the publication of shocking images of severely malnourished children in October 2017, the UN condemns "the deliberate starvation of civilians as a method of warfare".

The following month, the UN children's agency UNICEF says childhood malnutrition levels in the region are the highest recorded in Syria.

Promoted
Listen to the latest songs, only on JioSaavn.com
The first UN aid convoy was able to enter the region on March 5, days after the UN ordered a humanitarian truce, but offloading was cut short after fresh air strikes nearby.

(This story has not been edited by NDTV staff and is auto-generated from a syndicated feed.)
Comments
Eastern Ghouta DamascusSyriaDamascus