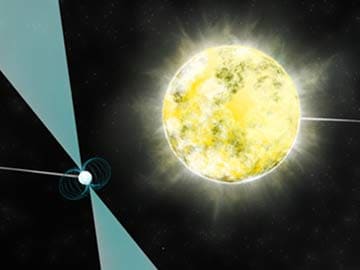 A team of astronomers using the GBT and VLBA has identified possibly the coldest, faintest white dwarf star ever detected.

Washington: A team of astronomers has identified possibly the coldest, faintest white dwarf star ever detected. This ancient stellar remnant is so cold that its carbon has crystallised, forming, in effect, an earth-sized diamond in space.

It is likely its age is the same as of the Milky Way, approximately 11 billion years old.

"It is a really remarkable object," said David Kaplan, professor at University of Wisconsin-Milwaukee in the US.

"These things should be out there, but because they are so dim they are very hard to find," he said.

White dwarfs are extremely dense end-states of stars that have collapsed.

Composed mostly of carbon and oxygen, white dwarfs slowly cool and fade over billions of years.

"If there is a white dwarf there, and there almost certainly is, it must be extremely cold," he added.

The researchers calculated that the white dwarf would be no more than a comparatively cool 3,000 degrees Kelvin (2,700 degrees Celsius).

Astronomers believe that such a cool, collapsed star would be largely crystallised carbon, not unlike a diamond.

The findings were published in the Astrophysical Journal.
Comments
Astronomersdiamondearth-sizedspacewhite dwarf star