Doomsday Clock Is Stuck At 2 Minutes To "Midnight," Symbolic Hour Of Apocalypse

The clock, a metaphorical measure for the world's proximity to global disaster, advanced 30 seconds last year, to two minutes to "midnight." 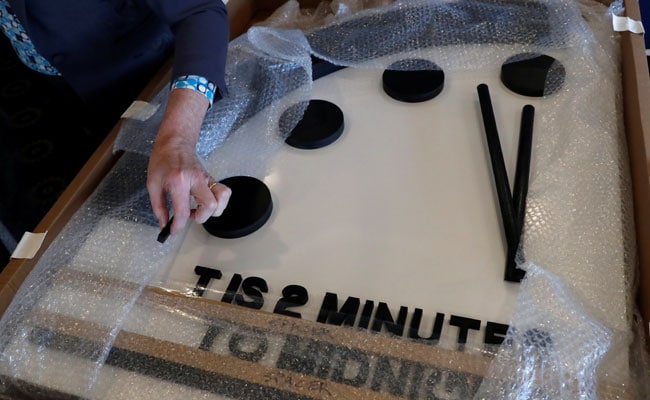 The scientists announced Thursday that the clock is stuck at 11:58, citing nuclear weapons and climate change as two existential risks that leave the world dangerous close to an apocalypse.

Bulletin President Rachel Bronson told The Washington Post that the scientists felt that keeping the clock at that "daunting time" was appropriate because "the time corresponded to the message we were sending." She said the board was particularly concerned that "U.S.-Russian relations are near an all-time low," "the arms control architecture is deteriorating," and "carbon emissions are rising after a period of plateauing."

She particularly emphasized that "the intentional undermining of the information architecture for political purposes, which we view as a threat multiplier - makes everything that we're doing more difficult."

Bronson, the Bulletin president, said the time on the clock right now is the most dangerously close it has been to doom since 1953, when the United States and Soviet Union began testing hydrogen bombs.

Although the time on the clock remains the same, Bronson said, some circumstances have changed over the past year. She noted that the scientists were encouraged that the rhetoric surrounding the Korean Peninsula has calmed, but, as for some other dangers, the scientists did not see a "qualitative" difference that would warrant changing the clock.