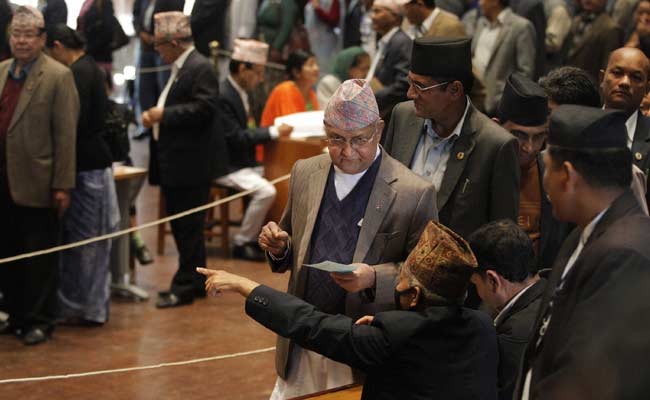 Tensions inflamed by anti-Constitution sentiments flared anew today with agitating activists of Madhes-based political parties clashing with the police in Nepal's southern city of Birgunj. An Indian national died in police firing in the Nepali border town -- the victim was a resident of Raxaul across the border in Bihar.

Hours after the death of the Indian national, Mr Oli at a public function in Kathmandu criticised the Indian policy concerning Nepal, particularly after the promulgation of the new federal republican Constitution on September 20.

The much awaited charter has evoked strong resentment from the southern Nepali Terai region where the Madhesi political parties as also indigenous groups have launched a violent protest alleging that their interests have been again ignored.

Mr Oli accused India of "propping up" the Madhes-based political parties to impose blockades at major customs points along the 1751-km open border between the two neighbours.

"Why is India rallying behind the four Madhes-based parties," he asked, adding that it was Nepal's responsibility to address the grievances of the various agitating groups.

"The Constitution is not targeted against any country," he said, adding that it was promulgated with 96 per cent of the Constituent Assembly members voting in its favour.

Following the death of the Indian national in Birgunj, the Madhesi political parties warned that they will not sit down for talks with the government in Kathmandu.

Nepal is reeling under severe and chronic shortage of fuel, essential commodities and medicines due to the border-blockade.

Nepal has accused India of imposing an unofficial blockade at the border while New Delhi maintains that transportation of essentials and other goods was hampered by the ongoing violent agitation within land-locked Nepal.

The agitating parties in a statement said talks with the government were unlikely to make any headway in the new emerging context.

Meanwhile, Rekha Sharma, a minister representing the Unified CPN-Maoist party, said the agitating parties should not whip up sentiments related to the killing of the Indian.

"It will only digress the positive environment for talks," Mr Sharma said, urging the Madhes-based parties to change the modality of their demonstrations.

"The way the ruling parties and the Madhesi groups are dealing with the situation, it is going to be very difficult to deal with," he said.