The 41-year-old appeared relaxed as he emerged from a three-hour closed-door session with the Senate Intelligence Committee as part of the Republican-led panel's two-year investigation of Russian interference in the 2016 US presidential election. 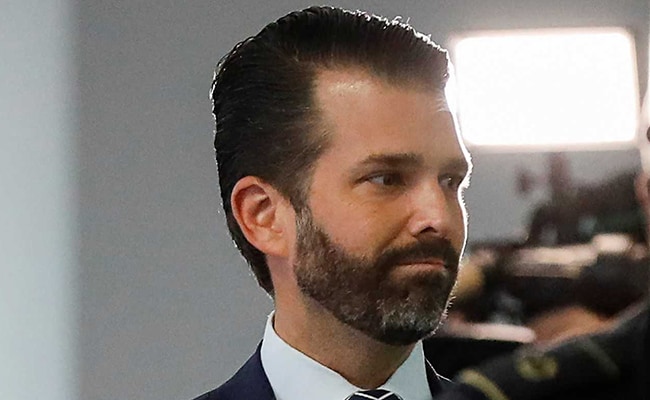 Donald Trump Jr wrapped up a return interview Wednesday with US lawmakers who questioned him about his contacts with Russians, with the president's eldest son dismissing concerns he may have perjured himself in his 2017 testimony.

The 41-year-old appeared relaxed as he emerged from a three-hour closed-door session with the Senate Intelligence Committee as part of the Republican-led panel's two-year investigation of Russian interference in the 2016 US presidential election.

Trump Jr, who helms the Trump Organization collection of businesses that his real estate billionaire father ran for decades, earlier told reporters there was "nothing to correct" from his previous comments to the committee.

After his interview, he maintained he had been consistent in his testimony.

"I don't think I changed anything of what I said because there was nothing to change," Trump Jr said. "I'm glad that this is finally over (and) we're able to put some final clarity on that."

Asked if he was worried about perjury, Trump Jr responded: "Not at all."

"If it's what you say, I love it," Trump Jr had written in response to a 2016 email offering the information in a meeting, according to a transcript of his 2017 Senate testimony.

On Wednesday Trump Jr said he provided "clarification" to the intelligence panel after special counsel Robert Mueller's Russia report, submitted in April, detailed how the president's former lawyer Michael Cohen recalled that Trump Jr may have told his father about a meeting to collect "adverse information" on Clinton.

Cohen is currently serving a prison sentence for campaign finance violations and lying to Congress, something Trump Jr. pointed out as he defended his prior testimony.

Some Democrats suspect Trump Jr may have lied about what he and his father knew about the now-infamous meeting, as well as other connections between the Trump campaign and Russia.

The Trump team had initially tried to cover up the meeting, providing conflicting stories about the purpose of the gathering and what happened.

Trump Jr had also appeared before the intelligence committee in 2017, and the its Republican chairman, Senator Richard Burr, faced criticism from within his party for calling Trump Jr to appear a second time.

Burr said Wednesday he would not comment on Trump Jr's interview or his characterization of his consistency in testimony, suggesting people could "take him at his word."

Trump Jr also likely faced questions about plans to build a Trump Tower in Moscow, a project that continued well into the 2016 presidential campaign despite Trump's team saying the deal had fallen through.

Trump Jr is a fierce defender of his father, and like the president is an adept Twitter user. Junior had tweeted out the full email chain of his communications setting up the Manhattan Trump Tower meeting, as a way to preempt an upcoming report about it.

He had already been grilled for hours by US lawmakers on issues that were also the focus of Mueller's 22-month investigation, which ended earlier this year.

In May the president said he was "very surprised" to learn that the intelligence panel, known for its bipartisanship, had subpoenaed his son to testify again.

Trump has said Mueller's voluminous report vindicated him of allegations of collusion with Russia and obstruction of justice, and that Democrats were pursuing a "witch hunt" against him and his administration.

He has also said the report "totally exonerated" his son.

Mueller said he could not file charges against Trump, but he set forth 10 instances in which Trump sought to thwart the investigation.

The probe led to the indictments of at least 34 American and Russian individuals or entities.

Among them are six former aides to Trump, including Cohen and Manafort, who was indicted for tax fraud and is now in prison.