"Will Be Beauty": Trump 'Wishes' Jeff Bezos On Divorce Amid Affair Buzz

The National Enquirer reported that Jeff Bezos has been having a relationship with Lauren Sanchez, a former TV anchor, helicopter pilot and the wife of Hollywood talent agent Patrick Whitesell. 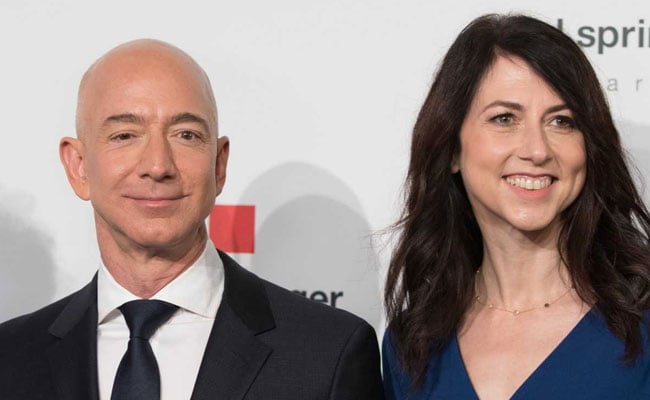 Jeff Bezos and MacKenzie Tuttle announced their divorce after 25 years of marriage. (AFP)

US President Donald Trump wished Amazon Inc founder Jeff Bezos luck in his divorce from his wife MacKenzie, predicting the proceedings will be "a beauty."

"I wish him luck," the twice-divorced Trump told reporters at the White House on Thursday as he departed for a trip to the US border with Mexico. "It's going to be a beauty."

Bezos and his wife announced they would divorce on Wednesday. Later in the day, the National Enquirer -- whose chairman and chief executive, David Pecker, has been a close Trump ally -- reported that Bezos has been having a relationship with Lauren Sanchez, a former TV anchor and helicopter pilot and the wife of Hollywood talent agent Patrick Whitesell.

The Enquirer said it had been actively investigating the relationship between Bezos and Sanchez for four months.

The New York Post also reported the relationship and said Whitesell and Sanchez are separated.

Trump has a history of publicly attacking Bezos and his company. The president has criticized coverage of his administration by the Bezos-owned Washington Post, and he's pressured the US Postal Service to raise the prices it charges Amazon to ship its packages.

Pecker is cooperating with federal prosecutors who are investigating so-called catch-and-kill payments the Enquirer made ahead of the 2016 presidential election to at least one woman who alleged she had an affair with Trump. The Enquirer secured the rights to the material, assuring the allegations wouldn't be shared with other media, then never published the story.