At their Helsinki summit, the US president refused to denounce Russia's interference in the 2016 election and condemned the Mueller probe as a "disaster for our country." 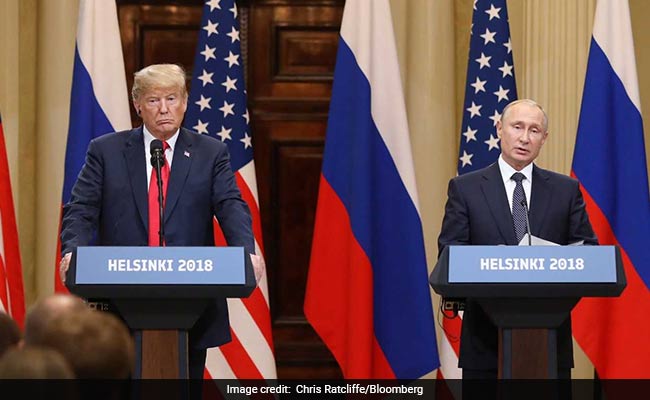 The gathering turned into a clear political victory for the Russian president.

President Donald Trump handed Russian President Vladimir Putin an unalloyed diplomatic triumph during their summit here Monday as he refused to support the collective conclusion of U.S. intelligence agencies that Russia had interfered in the 2016 U.S. presidential election.

Trump's warm rhetorical embrace of Putin, who he said had given him an "extremely strong and powerful" denial that Russia assaulted America's democracy, marked an extraordinary capstone to the first formal meeting between the current leaders of the world's nuclear superpowers and sparked trepidation and horror among many in Washington and around the globe.

At a remarkable 46-minute joint news conference inside the Finnish presidential palace, Trump would not challenge Putin's claim that the Russian government played no role in trying to sabotage the U.S. election, despite the Justice Department's indictments Friday of 12 Russian intelligence officers Friday accused of hacking Democratic emails as part of a broad subterfuge operation to help Trump win the election.

Trump went on to condemn the expansive federal investigation of Russian interference as "a disaster for our country" and "a total witch hunt," arguing that the probe, along with "foolish" American policies, had severely impaired relations between the two countries.

The gathering along the glistening waterfront of this Nordic capital turned into a clear political victory for the Russian president, who aims to expand his country's global influence by sowing discord within the United States and disrupting Western alliances.

Russian Foreign Minister Sergei Lavrov called the summit "fabulous" and "better than super," according to Russian news agencies, while Putin spokesman Dmitry Peskov was snickering with exuberance as he watched the news conference from the sidelines.

Trump and Putin spent their first two hours speaking alone, joined only by their interpreters. After emerging from the tete-a-tete with the former KGB agent, Trump appeared to discount the findings of his own intelligence agencies about Russia's behavior.

Both presidents are highly focused on projecting dominance and machismo, but Trump on Monday waffled beside a stone-faced Putin and avoided a confrontation when an Associated Press reporter asked Trump whether he believes U.S. intelligence officials or Putin.

"They said they think it's Russia," Trump replied, referencing intelligence officials. "I have President Putin - he just said it's not Russia."

Trump added: "I will say this - I don't see any reason why it would be . . . I have great confidence in my intelligence people, but I will tell you that President Putin was extremely strong and powerful in his denial today."

Trump declined an invitation by the AP reporter, Jonathan Lemire, to warn Putin, with the world watching, never again to interfere in a U.S. election.

And with Trump looking on, Putin insisted to reporters that "the Russian state has never interfered and is not going to interfere into internal American affairs, including election process."

Putin suggested what Trump described as an "interesting idea" - that special counsel Robert Mueller's investigators could come to Russia and help question the dozen Russian suspects, as long as Russians could do the same of U.S. intelligence agents that Moscow suspects of carrying out crimes on Russian soil.

Trump's failure to confront Putin drew stern rebukes from leaders of both political parties in Washington and left the American national security establishment alarmed and dismayed.

Director of National Intelligence Daniel Coats responded by stating that the intelligence assessment of Russia's "ongoing, pervasive efforts to undermine our democracy" has been clear and has been presented to Trump in an unvarnished and objective fashion. 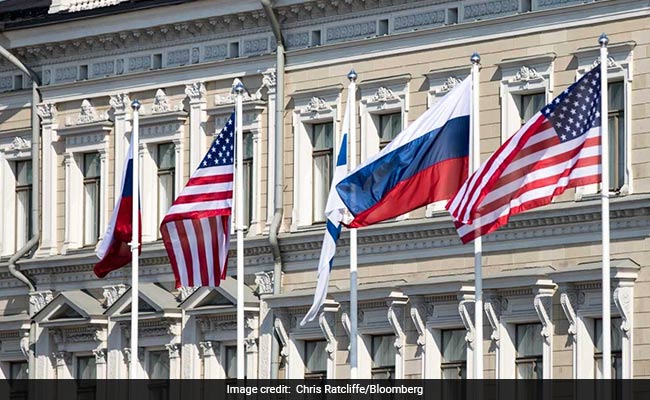 Former CIA director John Brennan tweeted that Trump proved himself to be "wholly in the pocket of Putin" and that his comments were "nothing short of treasonous."

Meanwhile, House Speaker Paul Ryan, R-Wis., said "there is no question that Russia interfered in our election and continues attempts to undermine democracy."

And Sen. John McCain, R-Ariz., called the Helsinki summit "a tragic mistake," arguing that Trump delivered "one of the most disgraceful performances by an American president in memory."

One of the few defenses in Washington came from Vice President Mike Pence. "What the world saw, what the American people saw, is that President Donald Trump will always put the prosperity and security of America first," Pence said during an event at the Commerce Department.

As Trump returned to Washington aboard Air Force One, the president took to Twitter to defend his performance.

"As I said today and many times before, 'I have GREAT confidence in MY intelligence people.' However, I also recognize that in order to build a brighter future, we cannot exclusively focus on the past - as the world's two largest nuclear powers, we must get along!" wrote the president, who has remained fixated on the exploits of his campaign two years ago.

For three straight days leading up to the summit, Trump vented on Twitter and stewed in private with advisers over the indictments of a dozen Russian intelligence officers. The probe, overseen by Mueller, has produced charges against or guilty pleas from 32 Russians and Americans, including charges against former Trump campaign chairman Paul Manafort, who is in jail.

Discussing the investigation here Monday with Putin at his side, Trump insisted that there had been no coordination between his campaign and Moscow, using as his argument that he had no relationship with Putin at the time.

"I didn't know the president," Trump said. "There was nobody to collude with. There was no collusion with the campaign."

Trump went on to air many of his pet grievances, including unsubstantiated conspiracies familiar to his campaign rally crowds and Twitter followers.

"What happened to the servers of the Pakistani gentleman that worked on the [Democratic National Committee]?" Trump asked. "Where are those servers? They're missing. Where are they? What happened to Hillary Clinton's emails? Thirty-three thousand emails gone - just gone. I think in Russia they wouldn't be gone so easily. I think it's a disgrace that we can't get Hillary Clinton's 33,000 emails."

Putin confirmed that he wanted Trump to defeat Clinton "because he talked about normalizing relations" between Russia and the United States. When asked whether the Russian government had compromising information on Trump or his family members, Putin did not answer directly and dismissed the question by saying, "It's hard to imagine greater nonsense." He told reporters, "Please throw this junk out of your head."

In the morning hours before the summit began, Trump said his own country, rather than Russia, was to blame for the hostilities between their two nations. Although most U.S. officials fault Russia's election interference, its alleged use of a nerve agent on British soil and its aggression in Ukraine and Syria, Trump instead faulted "U.S. foolishness and stupidity" in a tweet. The Russian Foreign Ministry's official Twitter account retweeted it and added, "We agree."

After sitting down with Putin, Trump said relations had warmed - and Putin agreed.

"The Cold War is a thing of the past," Putin said, saying that he and Trump spoke "in a frank and businesslike atmosphere."

In a show of bonhomie, Putin, who hosted the World Cup soccer tournament that concluded Sunday in Moscow, handed Trump a souvenir soccer ball. "Now the ball is in your court," Putin said. The United States, Canada and Mexico will jointly host the World Cup in 2026, after Qatar in 2022.

Trump tossed the ball to first lady Melania Trump, who was sitting in the front row at the news conference, and said they would give it to their son, Barron, 12.

Sen. Lindsey Graham, R-S.C., who was critical of Trump's performance Monday, tweeted, "If it were me, I'd check the soccer ball for listening devices and never allow it in the White House."

Helsinki, which sits across the Gulf of Finland from Putin's hometown of St. Petersburg, has hosted past diplomatic breakthroughs between American and Russian presidents because of Finland's stance of political neutrality. Although a member of the European Union, Finland is not part of NATO.

But Monday's summit here produced no such breakthrough. Trump and Putin said they discussed a range of issues - including the civil war in Syria as well as terrorism and nuclear disarmament - but announced no substantive agreement at the conclusion of their discussions.

Heading into the summit, U.S. officials said the meeting itself was a "deliverable," and Trump said there would be future talks between the two presidents and their delegations.

"Our relationship has never been worse than it is now," Trump said as he stood alongside Putin at the summit's conclusion. "However, that changed as of about four hours ago."

(Except for the headline, this story has not been edited by NDTV staff and is published from a syndicated feed.)
Comments
Donald Trump Putin SummitTrump Putin Finnish Meet