"Future" Not For "Globalists", It "Belongs To Patriots": Trump At UN

Donald Trump read his address in a sombre monotone, rarely punctuating words or pausing for emphasis, but his message for the 74th session of the annual gathering of world leaders 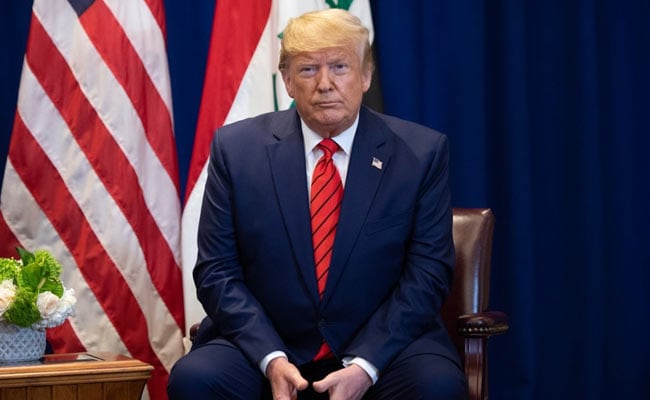 "The future does not belong to globalists. The future belongs to patriots," Donald Trump said

President Donald Trump delivered one of his harshest critiques of globalism here on Tuesday at the U.N. General Assembly, promoting the "America First" ethos that has defined his presidency on issues of defense, trade and immigration before a body built on international cooperation.

Trump read his address in a somber monotone, rarely punctuating words or pausing for emphasis, but his message for the 74th session of the annual gathering of world leaders was clear as he argued that a view of the world as a global commons had "exerted a religious pull over past leaders" at the expense of their own nations.

Trump's speech before the United Nations - a group founded on the principle that multilateral cooperation can stop international conflicts - underscored that his administration sees little benefit in assuming much of the global leadership responsibilities embraced by his predecessors.

In his 37-minute address, Trump stressed that all nations must take care of themselves first while adding that the United States would get involved abroad only when its own interests were threatened.

He also used his platform Tuesday to take a hard line against Iran as tensions between the two countries escalate following an attack on a Saudi oil facility earlier this month.

The United States - joined by the United Kingdom, France and Germany this week - has blamed Iran for the attack on the oil facility, and during Tuesday's address, Trump called Iran "one of the greatest security threats facing peace-loving nations today."

"All nations have a duty to act. No responsible government should subsidize Iran's blood lust," Trump said. "As long as Iran's menacing behavior continues, sanctions will not be lifted. They will be tightened."

But Trump's reluctance to escalate the standoff with Tehran into a military confrontation was on display later Tuesday when he teased a potential meeting with Iranian President Hassan Rouhani, saying Iran "would like to negotiate" but that the two sides had not agreed to that "yet."

For a majority of his address, Trump highlighted his nationalist perspective in a multitude of areas, particularly on trade and immigration - two issues that helped catapult him into the White House.

On immigration, Trump issued his characteristic warnings toward migrants from Central America making the journey to the United States' southern border, saying: "If you make it here, you will not be allowed in; you will be promptly returned home."

His message for those he claims advocate for "open border" policies was more stark.

"Your policies are not just. Your policies are cruel and evil," Trump said. "You put your own false sense of virtue before the lives, well-being and countless innocent people. When you undermine border security, you are undermining human rights and human dignity."

He said the United States had worked with several countries in Central America and highlighted El Salvador, which signed an "asylum cooperation agreement" last week with the United States in an attempt to divert some of the record numbers of U.S.-bound migrants Trump is scheduled to meet with the country's president, Nayib Bukele, on Wednesday.

Trump said the United States has an "ambitious campaign to reform international trade" and stressed his desire to complete separate bilateral trade agreements with the United Kingdom and Japan. He discussed the issue with British Prime Minister Boris Johnson on Tuesday, and trade is sure to surface when Trump sits down with Japanese Prime Minister Shinzo Abe on Wednesday - particularly as Japanese concerns over auto tariffs are now stalling a deal between the two countries.

"For decades, the international trading system has been easily exploited by nations acting in bad faith," he said. "As jobs were outsourced, a small handful grew wealthy at the expense of the middle class.

Trump said his approach to trade can be best understood through his policies toward China, a country with which the United States has been embroiled in an escalating trade war.

China, Trump said, has "embraced an economic model dependent on massive market barriers, heavy state subsidies, currency manipulation, product dumping, forced technology transfers and a theft of intellectual property." Trump called for an overhaul of the World Trade Organization, arguing that China should not be able to "game the system at others' expense" through it.

"I will not accept a bad deal for the American people," Trump said.

Trump's address Tuesday came while he is under mounting scrutiny over his purported attempts to pressure Ukraine to investigate former vice president Joe Biden and his family - revelations that prompted Speaker Nancy Pelosi, D-Calif., to announce Tuesday that the House will launch a formal impeachment inquiry into the president.

As he arrived at the U.N. Tuesday, Trump was engulfed with questions about why he withheld nearly $400 million in military aid for the small eastern European democracy at least a week before a July 25 phone call with Ukrainian President Volodymyr Zelensky, during which Trump is said to have raised the idea of launching a probe into Hunter Biden's business dealings in Ukraine.

Trump is scheduled to meet with Zelensky on Wednesday.

Although the burgeoning controversy involving Ukraine has overshadowed Trump's agenda during his visit to the United Nations this year, one development that could draw some attention away from it is a face-to-face encounter with Rouhani.

Trump had played down the prospect of such a meeting for days, but his tone changed Tuesday.

Trump also suggested he has given some thought to the format for a possible sit-down. "We're here. We're in New York together, and we have the time to do it."

Trump would be the first U.S. president to meet with Iran's leader since before the 1979 revolution that launched the Islamic Republic and its clerical leadership. Direct diplomacy with Iran has long appealed to Trump, as he pursues a dual strategy of tightening sanctions and an open door to talks.

"Trump continues to tap everyone and their mother as an intermediary to persuade Iran to return to talks," said Mark Dubowitz, chief executive of Foundation for the Defense of Democracies. "Showing an openness to diplomacy is one thing. Demonstrating desperation for a deal is quite another."

In his U.N. address, Trump hit on several topics that have become familiar refrains back home and during his campaign rallies - except delivered in a much more subdued fashion.

He touted unemployment rates for minority Americans and highlighted his own diplomatic efforts with dictators such as North Korean leader Kim Jong Un. Trump also criticized the outsized influence of social media companies, saying they had played too big of a role in silencing voices - echoing a critique made by some conservatives.

And as he referenced the ongoing turmoil in Venezuela, Trump took the opportunity to swipe at socialism - calling it the "wrecker of nations and destroyer of societies."

"Socialism and communism are about one thing only: power for the ruling class," Trump said. "Today, I repeat a message for the world that I have delivered at home: America will never be a socialist country."

Trump also emphasized his desire to limit the United States engagement around the world militarily.

"The United States does not seek conflict with any other nation," Trump said. "We desire peace, cooperation, and mutual gain with all. But I will never fail to defend America's interests."

(Except for the headline, this story has not been edited by NDTV staff and is published from a syndicated feed.)
Comments
Donald TrumpNationalism