The Muslim Brotherhood was designated a terrorist organization by Cairo after the military in 2013 ousted Mohamed Morsi, a democratically elected president with roots in the movement. 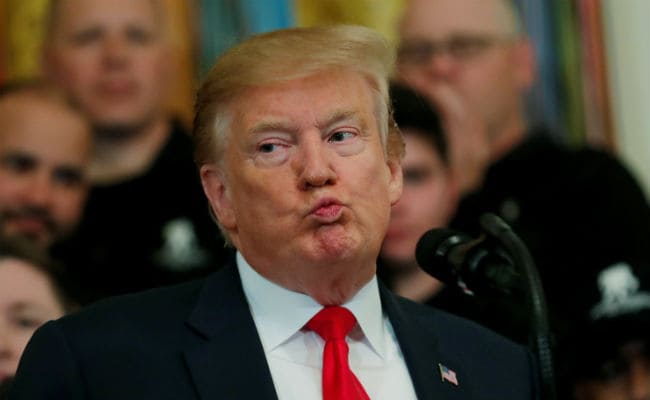 Donald Trump is seeking a ban on the Muslim Brotherhood

President Donald Trump is seeking to blacklist the Muslim Brotherhood as a terrorist group, a far-reaching step that would place the United States firmly on the side of its authoritarian allies in the Middle East.

"The president has consulted with his national security team and leaders in the region who share his concern, and this designation is working its way through the internal process," said White House Press Secretary Sarah Sanders.

The Brotherhood, a nearly century-old Islamist movement born in Egypt with pockets of support across the Arab world, was designated a terrorist organization by Cairo after the military in 2013 ousted Mohamed Morsi, a democratically elected president with roots in the movement.

Placing the Muslim Brotherhood on Washington's list of foreign terrorist organizations would make it a crime for any American to assist the group and would ban from the United States its members, who are active in political parties in several countries.

The move comes three weeks after Trump welcomed Egypt's President Abdel Fattah al-Sisi, who has cracked down heavily on the Muslim Brotherhood as well as other movements ranging from Islamic State extremists to secular activists.

During their White House talks, Trump praised Sisi for "doing a great job," saying the United States and Egypt had "never had a better relationship."

The terrorist designation would delight Sisi as well as Saudi Arabia, which despite its ultra-conservative Wahabi ideology disdains the Muslim Brotherhood due to its support for political change in the kingdom, including over Riyadh's alliance with Washington.

But targeting the movement would be a major new impediment in US ties with NATO ally Turkey, where President Recep Tayyip Erdogan has pushed an Islamist foreign policy that includes support for the Muslim Brotherhood inside Egypt.

Another US ally friendly toward the Muslim Brotherhood is Qatar, with the issue becoming a key source of friction with its neighbors Saudi Arabia and the United Arab Emirates.

Signature cause for US conservatives

Secretary of State Mike Pompeo has been a longtime supporter of designating the Muslim Brotherhood as a terrorist group, co-sponsoring legislation with fellow conservatives to take the step when he was a member of Congress.

The Muslim Brotherhood has emerged in recent years as a favorite bugbear for the US far-right, with numerous social media users on Tuesday hailing Trump's push by sharing unfounded conspiracy theories that the group had infiltrated former president Barack Obama's administration or was attempting to impose Islamic sharia law in the United States.

But the proposal has seen pushback from policymakers who say that it is inaccurate to lump together the Muslim Brotherhood, which includes more moderate and democratic strains, with groups set on apocalyptic violence such as the Islamic State movement and Al-Qaeda.

Human Rights Watch has argued that a terrorist designation would "unfairly taint anyone alleged to be linked to the Muslim Brotherhood," meaning that people based in the United States could face prosecution -- or, if not citizens, deportation -- for backing charities or advocacy groups accused of ties to the movement.

Jonathan Schanzer, senior vice president for the Foundation for Defense of Democracies, which generally backs hawkish policies in the Middle East, doubted that the whole Muslim Brotherhood could be declared a terrorist group under normal processes.

"There is near zero likelihood of the entire network, with all its disparate parts, meeting legal criteria," he tweeted.

"But targeting the violent branches is certainly viable. That, in turn, can enable further designations based on financial ties."

The debate comes less than a month after the Trump administration took the sweeping decision to declare Iran's elite Revolutionary Guards a terrorist group, the first time it has designated a unit of a government.

Egypt is one of the biggest US strategic partners -- an Arab country that made peace with top US ally Israel 40 years ago and remains one of the largest recipients of US aid, at more than $1 billion a year.

Trump has all but ended criticism of Egypt's rights record. When Sisi took over in 2013, security forces killed some 700 protesters who had assembled in two Cairo squares -- with courts then sentencing to death 75 people, including Muslim Brotherhood leaders, over the uprising.