"Within the first minute, I'll know. My touch, my feel - that's what I do," Trump said during a news conference in Quebec. 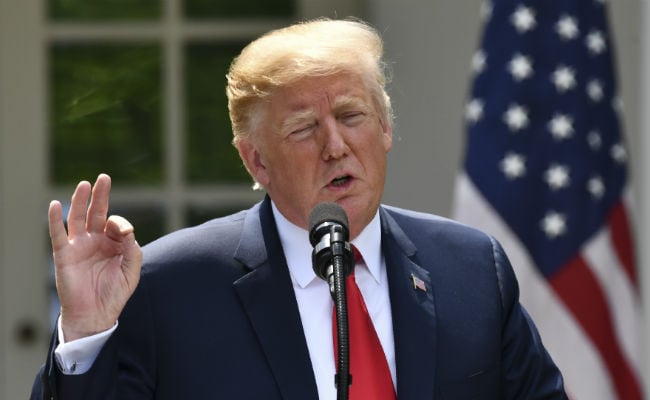 Donald Trump has acknowledged the summit is unlikely to achieve a major breakthrough.

Singapore: President Donald Trump predicted Saturday that he will know almost immediately when meeting Kim Jong Un whether the North Korean leader is serious about negotiating a nuclear deal, suggesting his intuition is enough to size up the leader of the world's most opaque authoritarian regime.

"Within the first minute, I'll know. My touch, my feel - that's what I do," Trump said during a news conference in Quebec as he prepared to depart the Group of Seven summit en route to Singapore, where he is scheduled to meet Kim on Tuesday.

"You know the way they say you know if you like somebody in the first five seconds?" he added. "Well, I think very quickly I'll know whether something good is going to happen. I think I'll also know whether it will happen fast."

Trump's remarks came two days after he said he didn't need to do a lot of preparation ahead of the historic summit because the interpersonal relationship between the two leaders would be the more important factor. Foreign policy analysts have said that Kim is likely to attempt to get Trump to agree on mostly symbolic steps, including a peace deal to formally end the Korean War, while biding time on significant commitments toward denuclearization.

As he has in recent days, however, the president sought to tamp down expectations, after once having pledged to demand that Kim rapidly turn over his nuclear arsenal. Instead, Trump acknowledged, the summit is unlikely to achieve a major breakthrough, stating that at minimum he would like to "start a dialogue" with Kim.

"I'd like to accomplish more than that," Trump said. But if not, "at least we'll have met each other, we'll have seen each other; hopefully, we'll have liked each other. We'll start that process. . . . But I think it will take a little bit of time."

Trump's remarks came after an uncomfortable overnight visit to the G-7 meeting where he and the other world leaders struggled to bridge their differences on trade and other matters. The president appeared tired and subdued, and he demeaned the press corps, calling some U.S. news outlets "unbelievably dishonest" and "fake news" before aides pulled him away to start his journey to Southeast Asia.

After a long flight aboard Air Force One that will include a refueling stop, the president is scheduled to arrive in Singapore on Sunday evening.

This city-state of 5.5 million people bustled with anticipation as workers raced to finish security preparations for an event with little modern-day precedent.

Outside the luxury St. Regis hotel, just beyond a busy upscale shopping corridor, construction crews hoisted concrete bollards into place around the perimeter of the five-star complex where the North Korean delegation is expected to stay.

A half-mile away at the Shangri-La Hotel, where the U.S. side will stay, Secret Service agents, in a casual uniform of khaki slacks and dark polo shirts, milled about the lobby. A yellow sign, featuring the silhouette of an officer holding a machine gun, was set up in the driveway reading, "Police checks, comply with police orders."

Singapore was selected as the host site because it has significant experience in staging major international events, including a summit between Chinese President Xi Jinping and then-Taiwanese President Ying-jeou in 2015, the first such meeting in nearly seven decades.

But the first-ever meeting between a sitting U.S. president and a North Korean leader will surpass them all in the sheer spectacle, a summit of global significance timed to begin squarely during prime time in the United States on Monday evening, a strategic decision by the ratings-conscious president.

The summit meeting will take place at 9 a.m. local time Tuesday - 9 p.m. Monday Eastern time - at the Capella Hotel on the resort island of Sentosa off Singapore's southern coast.

Organizers have braced for more than 2,000 reporters, most of whom will be housed in a makeshift media center at the Singapore's Formula One race-pit building. Among the celebrities who have said they will be in the city during the summit are former basketball star Dennis Rodman, one of the few people who have met both Kim and Trump, and Fox News host Sean Hannity.

Trump alluded to the historic nature of the event during his remarks in Quebec, calling it a "one-time shot" and urging Kim to seize the moment to "do something very positive for his people, for himself and for his family."

Kim has the "opportunity the likes of which, almost, if you look into history, very few people have ever had," Trump said. "He can take that nation, with those great people, and truly make it great."

Yet it remains unclear whether the two sides are attempting to reach commitments on tangible, confidence-boosting measures or trying instead to find consensus on broader shared principles to frame future negotiations.

Kim Jong Il, the current leader's father who died in 2011, violated past international deals aimed at curbing the North's nuclear program and ballistic missiles by launching new weapons tests. While the Trump administration has called for complete, verifiable denuclearization on a swift timetable, Pyongyang has signaled it expects a more incremental approach in which it receives reciprocal benefits along the way.

Trump suggested he will not be afraid to improvise.

"I have a clear objective," Trump said, "but I have to say it's going to be something that will always be spur of the moment. You don't know. This has not been done before."

While Trump's allies have called his unpredictability a negotiating strength that keeps his opponents off balance, some White House aides have expressed concern that the president will not heed talking points in his briefing materials. While U.S. intelligence officials know little about Kim and his regime, which tightly controls news and information in North Korea, analysts said Kim is sure to be studying Trump's large cache of public statements for clues as to how to negotiate with him.

Trump expressed frustration that some analysts have said Kim already has bested him simply by getting him to agree to a summit, noting that the regime released three American prisoners last month.

"The haters say, 'Oh, you're giving him a meeting!' Give me a break," Trump said. "Obviously, what has been done before hasn't worked. We shouldn't be in this position."

(This story has not been edited by NDTV staff and is auto-generated from a syndicated feed.)
Comments
Donald TrumpKim Jong Un