US President Donald Trump put pressure on the State Department to remove former US ambassador to Ukraine Marie Yovanovitch, according to her prepared remarks before Congress 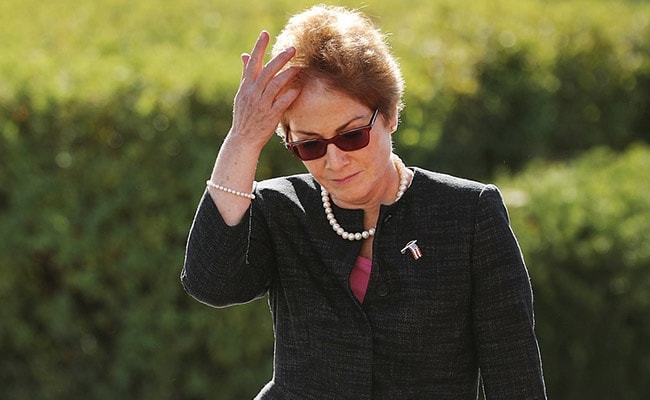 The former U.S. ambassador to Ukraine whose abrupt ouster in May has become a topic of interest for House impeachment investigators said Friday that her departure came as a direct result of pressure President Donald Trump placed on the State Department to remove her, according to her prepared remarks before Congress obtained by The Washington Post.

Marie Yovanovitch told lawmakers that she was forced to leave Kiev on "the next plane" this spring and subsequently removed from her post, with the State Department's No. 2 official telling her that though she had done nothing wrong, the president had lost confidence in her and the State Department had been under significant pressure to remove her since the summer of 2018.

In explaining her departure, she acknowledged months of criticisms by Trump's personal attorney Rudy Giuliani, who had accused her of privately badmouthing the president and seeking to protect the interests of former vice president Joe Biden and his son who served on the board of Ukrainian energy company.

Yovanovitch denied those allegations and said she was "incredulous" that her superiors decided to remove her based on "unfounded and false claims by people with clearly questionable motives." She also took direct aim at Giuliani's associates whom she said could've been financially threatened by her anti-corruption efforts in Ukraine.

"Contacts of Mr. Giuliani may well have believed that their personal financial ambitions were stymied by our anti-corruption policy in Ukraine," she said.

She arrived on Capitol Hill on Friday despite the White House's stated objections and refusal to cooperate with the Democrat-led proceedings.

She is one of several current and former diplomats whom the House Intelligence, Foreign Affairs and Oversight committees have identified as witnesses in their probe into whether Trump leveraged U.S. military aid and official diplomatic interaction to pressure Ukraine's president to investigate his Trump's political rivals.

The panels have issued subpoenas to the White House, Giuliani, two of his business associates and several Cabinet-level officials - including Secretary of State Mike Pompeo and Secretary of Energy Secretary Rick Perry, Defense Secretary Mark Esper and the acting director of the Office of Management and Budget, Russell Vought - requesting materials related to the administration's interactions with Ukraine.

But to date, the panels have recorded only one deposition - with former special U.S. special envoy to Ukraine Kurt Volker, who quit his post hours after he was requested to appear for a deposition. At his session earlier this month, Volker turned over a series of text messages he exchanged with Giuliani, a top aide to Ukrainian President Volodymyr Zelensky and senior U.S. diplomats including Gordon Sondland, the U.S. ambassador to the European Union.

Sondland, whose planned deposition the State Department blocked earlier this week, has since been subpoenaed as well. His lawyers, Robert Luskin and Kwame Manley, said Friday that Sondland intends to comply with the subpoena and appear before the committees next Thursday, although he would not turn over the documents lawmakers have requested.

"By federal law and regulation, the State Department has sole authority to produce such documents, and Ambassador Sondland hopes the materials will be shared with the Committees in advance of his Thursday testimony," his lawyers said in a statement.

Volker's text messages pertain to the weeks before and after a July 25 call between Trump and Zelensky, in which the American president asked his Ukrainian counterpart to look into the purported involvement of Ukrainians in the 2016 U.S. presidential election and the role that former vice president Joseph Biden's son Hunter Biden played on the board of a Ukrainian energy company, Burisma.

Democrats have seized on how Trump asked Zelensky to "do us a favor, though" when the Ukrainian president brought up the subject of military aid that had been withheld, according to a rough transcript of the call released by the White House. Democrats allege that is evidence of a quid pro quo and an abuse of office.

Yovanovitch's term as ambassador to Ukraine ended before that period. But she is expected to be asked about what machinations she observed by others in the Trump administration regarding Ukraine, as well as efforts by Giuliani and others to drum dig up dirt on scrutiny regarding the Bidens. She is also expected to be asked about the circumstances that led to her own ouster.

Yovanovitch's early departure stunned career diplomats who had been planning high-level internal meetings for her that were scrapped because she would no longer be serving in the position.

The resignation this week of Michael McKinley, a career diplomat and senior adviser to Pompeo, came amid rising dissatisfaction inside the State Department at what is seen as Pompeo's failure to defend his subordinates who became targets in the Ukraine controversy.

According to an indictment that federal prosecutors in New York unsealed Thursday, a Soviet-born associate of Giuliani's met in the spring of 2018 with a U.S. congressman, who public campaign records indicate is former was Texas Republican Rep. Pete Sessions, to seek "assistance in causing the U.S. government to remove or recall the then-U. S. Ambassador to Ukraine." The indictment says continues that Giuliani's associate, Lev Parnas, pushed for Yovanovitch's ouster "at least in part, at the request of one or more Ukrainian government officials."

Sessions, who lost his reelection bid in November 2018, said Thursday that he did not know if he was the congressman mentioned in the indictment and denied any wrongdoing.

Zelensky won the Ukrainian presidential election in April of this year and took office on May 20, the same day as Yovanovitch was recalled.

The Washington Post's Rachael Bade and Mike DeBonis contributed to this report.

(Except for the headline, this story has not been edited by NDTV staff and is published from a syndicated feed.)
Comments
Donald TrumpMarie Yovanovitch