The 10-year contract, which is intended to transform and modernise the US military's cloud computing system, has been given to Microsoft. 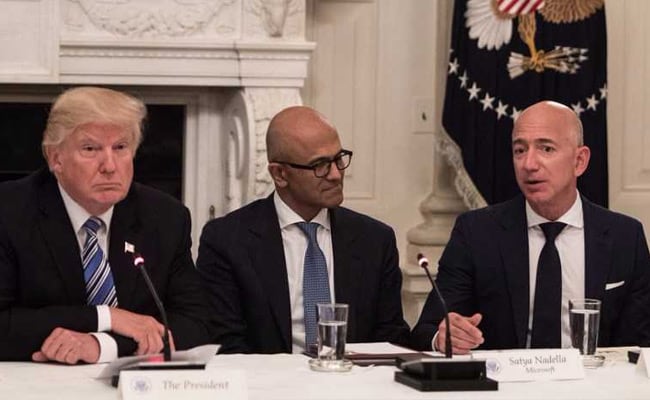 US President Donald Trump had directed his former Defence Secretary James Mattis to "screw Amazon' out of Pentagon's $10 billion cloud computing contract, his former speechwriter and communications director claimed in an upcoming book.

The development has come a day after the US Department of Defence awarded the Joint Enterprise Defence Infrastructure (JEDI) contract to Microsoft, bringing an end to a closely scrutinised contest involving companies like Amazon, Oracle, Google, and IBM.

The new book authored by Guy Snodgrass titled ''Holding The Line: Inside Trump's Pentagon with Secretary Mattis recounts that Trump called Mattis during summer 2018 and directed him to "screw Amazon" out of the opportunity to bid on the contract, CNN reported, citing a report by website Task & Purpose, which obtained an advanced copy of the book.

The 10-year contract, which is intended to transform and modernise the US military's cloud computing system, is considered significant, owing to its centrality to "new forms of war". Presently, much of the US military operates on computer systems from the 1980s and 1990s, the New York Times pointed out.

The development had come as a surprise given that Amazon had been considered a front-runner to win the contract, while Microsoft was considered in the lead for other government cloud programs, including an intelligence contract.

Amazon had responded to the news, saying that it was surprised by Pengaton's decision.

"AWS (Amazon Web Services, which is company's cloud platform) is the clear leader in cloud computing, and a detailed assessment purely on the comparative offerings clearly led to a different conclusion," Drew Herdener, a spokesperson for Amazon said.

"We remain deeply committed to continuing to innovate for the new digital battlefield where security, efficiency, resiliency, and scalability of resources can be the difference between success and failure," he added.

In the past, Trump has voiced his displeasure with Amazon and Jeff Bezos, who also owns The Washington Post. He has accused Amazon of taking advantage of the Postal Service even as independent investigations have disagreed with it.