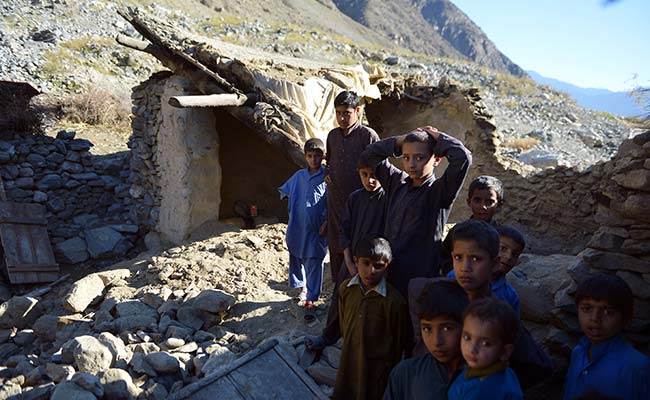 Afghan refugees earthquake survivors gather in their damaged house, in Kesu village, some 15 km from Chitral on October 28, 2015. (AFP)

Chitral, Pakistan: Earthquake survivors in Pakistan and Afghanistan emerged from a third night without shelter today, as village leaders warned they had nothing to protect children from the freezing conditions while rescuers struggle to reach isolated communities.

Desperate victims appealed for blankets, warm clothes and food after Monday's 7.5 magnitude earthquake ripped through the region, killing more than 380 people while levelling thousands of homes and forcing many to camp out in the open.

Rugged terrain, severed communication lines and an unstable security situation have impeded relief efforts since the disaster, and local officials said they had few supplies to hand after the region was devastated by floods just three months ago.

"We usually have our own stock but we already consumed it during the floods so we were running out of stock during this earthquake," Muhammad Bahadur, an official in the village of Darosh in Chitral, part of the Pakistani province of Khyber Pakhtunkhwa.

The northwestern region, which has been hit hardest by Monday's earthquake, also saw thousands evacuated in July as floodwaters swept away dozens of roads and bridges in the district.

Bahadur's village had just 70 tents on hand when the earthquake struck, he said.

"Around 2,500 houses have been completely destroyed Imagine how we can satisfy the need with only 70 tents?"

Hundreds of children are now sleeping under the open sky with little protection against sub-zero nighttime temperatures, he said. "We are trying to mobilise NGOs to help them because winter is approaching and it would be unbearable."

Pakistan's confirmed death toll so far stands at 267, with more than 1,800 people injured and 11,000 homes damaged, and authorities warn that number could spike with many isolated regions still cut off.

Aid agencies have warned that shelter and hygiene will be the most pressing needs for survivors in the coming days, with the UN saying children in particular face deadly conditions.

The Pakistan Red Crescent said Wednesday that snow was already falling in some areas across the region, forcing them to wait for the weather to clear before being able to reach out to those communities.

"Winter is coming and soon there will be snow everywhere, the children won't survive the cold," Shahroon, a resident of Usiak village in Chitral, told AFP.

Shahroon, who goes by one name, said children in his family as young as four were sleeping outside.

"If we stay here the kids will die we have lost everything already and can't afford to see these children die in front of us, they are the only valuables we have now."

The militants on Wednesday claimed to have overrun the remote district of Darqad in the earthquake-hit northern province of Takhar, underscoring the fragile security situation facing relief workers.

The insurgents have vowed their fighters would provide "complete help" in affected areas.

Afghan officials said 115 people were confirmed dead and hundreds more injured, with casualties reported from around half a dozen of the country's 34 provinces, and more than 7,600 homes reported damaged.

Desperate survivors were left marooned on mountaintops in Badakhshan, the remote province where the epicentre of the earthquake was located and where much of the territory is controlled by the Taliban.

The earthquake was centred near Jurm in northeast Afghanistan, 250 kilometres (160 miles) from the capital Kabul and at a depth of 213.5 kilometres, the US Geological Survey said.

Aid agencies have stressed the need for greater disaster preparedness in war-torn Afghanistan but it has been a low priority for the nation as it struggles to end a 14-year war against the Taliban insurgents.

The military has been leading Pakistan's rescue efforts, but residents in Chitral said that with winter fast approaching, they could not afford to waste time.

"People here are helping each other people whose houses survived in the earthquake provide food and shelter to those who are affected.

We all are helping each other to clear rubble from our houses."

Other survivors are already planning to leave if they do not receive help soon.

Shahroon in Chitral said if the government can help them rebuild before the snow comes they will stay, but "otherwise we will go to Rawalpindi or Peshawar or any other city and spend our lives begging on the roads".