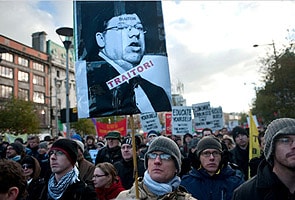 Dublin: After a week that brought Ireland  a pledge of a $114 billion international rescue package and the toughest austerity program of any country in Europe, tens of thousands of demonstrators took to Dublin's streets on Saturday to protest wide cuts in the country's welfare programs and in public-sector jobs.

The protests centered on a milelong march along the banks of the River Liffey in central Dublin to the General Post Office building on O'Connell Street, the site of the battle between Irish republican rebels and British troops in the Easter Uprising in 1916 -- an iconic event that many in Ireland regard as the tipping point in Ireland's long struggle for independence.

The choice of venue for the protests by the Irish Congress of Trade Unions, coordinating the march through the city, reflected the mood of anger, dismay and recrimination in the wake of the economic shocks of the past 10 days. Those shocks have been the culmination of two years in which the economy has shrunk by about 15 percent, faster than any other European economy.

Before that, Ireland enjoyed more than a decade of unprecedented prosperity, so the rescue package being worked out by the International Monetary Fund and the European Union and the austerity program the Dublin government has been forced to adopt to secure the bailout loans have come as a deep jolt.

Among other things, the austerity package will involve the loss of about 25,000 public-sector jobs, equivalent to 10 percent of the government work force, as well as a four-year, $20 billion program of tax increases and spending cuts like sharp reductions in state pensions and minimum wage. One Dublin newspaper, the Irish Independent, estimated that the cost of the measures for a typical middle-class family earning $67,000 a year would be about $5,800 a year.

The ensuing political turmoil has raised questions about the ability of the government of Prime Minister Brian Cowen to secure backing for the austerity package when it is presented to Parliament on Dec. 7. The coalition government was weakened last week by a split between the Fianna Fail party, which Mr. Cowen leads, and its main coalition partner, the Green Party, and a stunning loss by Fianna Fail in an election on Friday for a parliamentary seat that reduced the government majority to two.

The mostly peaceful and restrained nature of the protests on Saturday was one indication that the unrest may not lead to confrontations in the streets, as some have feared. On a bitterly cold day, organizers put the turnout at 100,000. The police estimated 50,000, still one of the largest protest gatherings in years.

Organizers had called for a "family friendly" demonstration, and the occasion passed with few incidents, apart from isolated scuffles between demonstrators and the police. With a police helicopter hovering overhead, speeches at the post office building drew cheers and shouts of support, and the detonation of some fireworks.

The restrained mood was enhanced by musical groups that performed along the way, including a kilted pipe band from the country's prison service. Protesters waved banners that depicted the austerity measures as an attack on the country's sovereignty by the international financial institutions drawing up the rescue package, and on the poor.

An older man placed blame for the crisis on the Cowen government, for failing to rein in the runaway property speculation that left Ireland's banks with a mountain of bad debt now borne by the taxpayers. "The government has robbed us," he said. "They've destroyed the country that we've built up over a number of years. They've just destroyed it."

The anger of many speakers, and among the protesters, appeared to fall about equally on the Cowen government and on the international financial institutions working out the details of the rescue package. Officials in Brussels, where European finance ministers were meeting Saturday to discuss the package, said it could be confirmed with an announcement on Sunday.

But if the government could take some encouragement from the orderly nature of the protests, its wider political prospects remained deeply uncertain. Fianna Fail's share of the vote in the election last week, in Donegal, fell to 21 percent from 51 percent in the general election of 2007. The seat was won by Sinn Fein, a historical rival of Fianna Fail dating from the struggle for independence nearly a century ago, but a marginal force in the republic's politics in recent decades.

Promoted
Listen to the latest songs, only on JioSaavn.com
Although by-elections are regarded as unreliable bellwethers of voting patterns in general elections, the Donegal result was a further pointer to what many Irish political commentators expect to be a harsh loss for Fianna Fail in a general election that Mr. Cowen has indicated he will call for February or March.

In the meantime, the prime minister has rejected calls for his or the government's resignation. He has said he intends to see the rescue package and the austerity program approved by Parliament before calling an election, the reverse of what Sinn Fein, among other groups, has demanded.