Covid-Hit Shanghai Is Gradually Reopening. Though, Curbs May Return 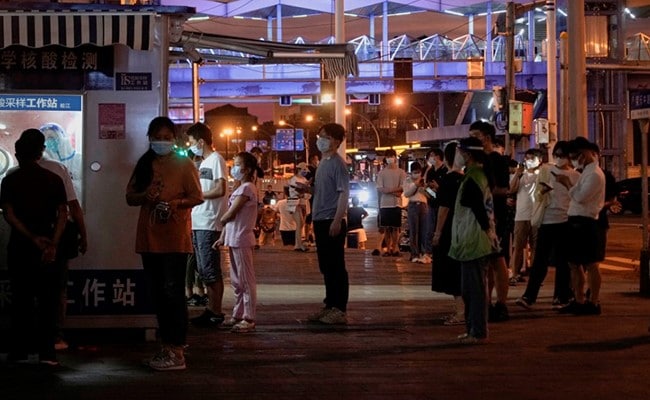 Covid In Shanghai: Shanghai's latest outbreak is linked to illegal karaoke services in a single building.

Shanghai reopened most cinemas on Friday, sticking to a plan of gradual resumption of daily activities after it lifted a two-month COVID-19 lockdown in June, while also trying, like several other Chinese cities, to contain resurgent infections.

Seeking to avoid a repeat of the ordeal that the commercial hub of 25 million suffered in April and May, Shanghai's strategy rests on frequent COVID testing, thorough contact tracing and isolated lockdowns of residential buildings and other venues.

Tougher restrictions may be needed if it fails to contain the virus. That would be a dire prospect for its residents who are only just recovering from the income losses, mental stress, and poor access to basic necessities suffered during the lockdown.

The city's latest outbreak is linked to illegal karaoke services in a single building.

"The cluster has a wide distribution of infected people, who had many social activities, and there are hidden transmission risks in the community," the city government said in a statement.

Several other cities across China were also racing to smother outbreaks early, once again raising concerns about China's economic growth outlook and potential disruptions to supply chains and international trade.

The efforts, which have fuelled frustration among Chinese in a sensitive year for the ruling Communist Party, are part of China's "zero COVID" strategy to eradicate any outbreaks as soon as they occur, despite the great costs incurred.

Premier Li Keqiang was quoted by state media on Thursday as saying that the world's second-largest economy was recovering from the supply shocks incurred while fighting COVID earlier this year, "but the foundation is unstable."

China is facing geopolitical headwinds, a property market downturn, and rising borrowing costs in most of its export markets, and some analysts say its growth target of around 5.5% this year may be out of reach.

President Xi Jinping, who is expected to secure a precedent-breaking third term later this year, has said China should not treat the virus as endemic as much of the world now does, as that would put many lives at risk.

With no end in sight to anti-COVID vigilance, residents across China will have to put up with relentless testing and the prospect of facing quarantine at any time, among other inconveniences.

Shanghai will conduct another round of mass COVID tests on Saturday and Sunday, in line with a plan to test its entire population every weekend until the end of the month. The city just finished a Tuesday to Thursday testing campaign.

Shanghai reported 45 new COVID cases for July 7, down from 54 the day before, mostly among people already under isolation orders.

The city is gradually reopening cinemas, theatres and other performance venues from Friday according to its post-lockdown plans. Some venues postponed their reopening as a precaution and are now refunding tickets, Chinese media reported.

Movie-goers will have to keep at least one seat free between them, with cinemas having to operate at 50% capacity.

Cinema tickets sales exceeded 1.4 million yuan by noon of Friday, and Jurassic World Dominion was the most popular film, according to Maoyan Entertainment.

Most of Shanghai's 300-plus cinemas had been closed since early March.

China's total caseload for Thursday was 478, higher than Wednesday's 409 - numbers which authorities in most other countries would now largely ignore.

Most cases were detected in the eastern Anhui province where more than 1 million people in small towns are locked down. There were dozens of new cases also in the Jiangsu province, and a few in Shaanxi and others.

The were no new cases detected in the capital Beijing on Thursday.

Pak To Impose Taxes Worth Rs 200 Billion To Comply With IMF Terms: Report