Honeymoon Amid COVID-19: US Doctors Back On Duty Hours After Wedding 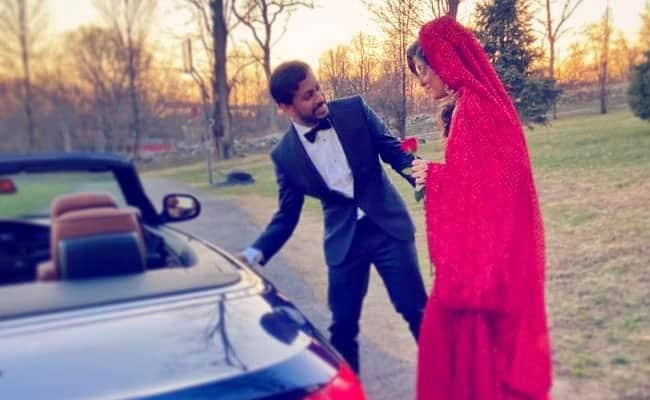 Kashif Chaudhry and Naila Shereen had to cancel their big plans due to Coronavirus.

She'd picked her dress, they'd booked their honeymoon and the wedding was set for the end of March. Then, the coronavirus pandemic hit.

Two weeks ago, they persuaded the imam at a mosque in Hawthorne, New Jersey, to open up for a quick nikkah marriage contract ceremony. The couple married the following day on Saturday and celebrated with the bride's family at her parents' house in New Windsor, New York.

After the ceremony, Shereen dropped her new husband at the airport 12 hours later.

Shereen was back at work by Monday.

As an internal medicine chief resident overseeing teams of residents, she rotates through different hospitals in New York, the epicenter of America's coronavirus outbreak. So far the disease has infected more than one million people and killed over 50,000 worldwide.

Shereen is working long days but says doctors are trying to keep each others' spirits up by swapping snacks and trading funny videos.

"We all know New York is bad but we know the worst is yet to come," she said. "I never thought I'd live through a pandemic."

Chaudhry, a 37-year-old cardiac electrophysiologist, is seeing patients via videoconferencing where he works at Mercy Medical Center in Cedar Rapids, Iowa. They've cancelled all elective operations to try to conserve their protective equipment when the coronavirus tsunami hits. But while his head is in Iowa, his heart is in New York.

The two doctors chat several times a day via Facetime. When asked about each other, Shereen said Chaudhry is "super funny" while he said he loves her "witty, sarcastic" sense of humour.

Both say their faith not just inspires but requires them to help - they are Ahmadi, a Muslim sect that believes in a prophet after Mohammed, an idea rejected by other Muslims.

Chaudhry, whose aid worker father also inspires him, already worked as a volunteer implanting pacemakers for free in Bolivia. He and Shereen started dating after she contacted him after volunteering in Guatemala to discuss other opportunities. Coffee turned into dinner, which they ate in a mall because he had forgotten his jacket.

"When we met up, we talked and talked. I just knew right away," he said. "We had to give up our big wedding but it's much more important I got to marry the woman I love."

US Records Over 53,000 Coronavirus Cases In 24 Hours: Report