A spokesman for Sinovac in Beijing said the company cannot comment on the Indonesian study until it acquires more details. 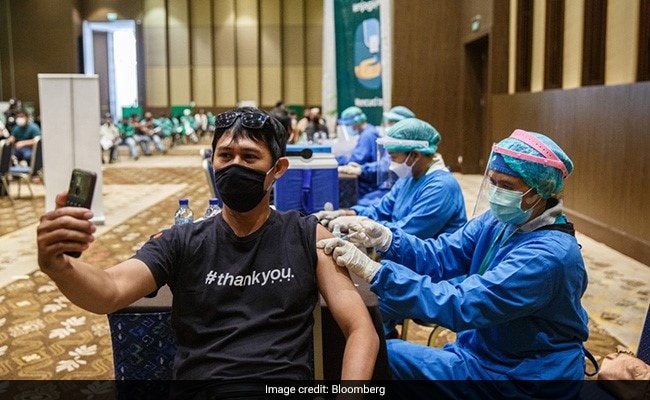 The vaccine's protection is likely to vary from place to place due to virus variants.

Sinovac Biotech Ltd.'s vaccine is wiping out Covid-19 among health workers in Indonesia, an encouraging sign for the dozens of developing countries reliant on the controversial Chinese shot, which performed far worse than western vaccines in clinical trials.

Indonesia tracked 25,374 health workers in capital city Jakarta for 28 days after they received their second dose and found that the vaccine protected 100% of them from death and 96% from hospitalization as soon as seven days after, said Health Minister Budi Gunadi Sadikin in an interview on Tuesday. The workers were tracked until late February.

Sadikin also said that 94% of the workers had been protected against infection -- an extraordinary result that goes beyond what was measured in the shot's numerous clinical trials -- though it's unclear if the workers were uniformly screened to detect asymptomatic carriers.

"We see a very, very drastic drop," in hospitalizations and deaths among medical workers, Sadikin said. It's not known what strain of the coronavirus Sinovac's shot worked against in Indonesia, but the country has not flagged any major outbreaks driven by variants of concern.

The data adds to signs out of Brazil that the Sinovac shot is more effective than it proved in the testing phase, which was beset by divergent efficacy rates and questions over data transparency. Results from its biggest Phase III trial in Brazil put the shot known as CoronaVac's efficacy at just above 50%, the lowest among all first-generation Covid vaccines.

A spokesman for Sinovac in Beijing said the company cannot comment on the Indonesian study until it acquires more details.

In a separate interview with Bloomberg Tuesday, Sinovac's chief executive officer Yin Weidong defended the disparity in clinical data around the shot, and said there was growing evidence CoronaVac is performing better when applied in the real world.

But the real-world examples also show that the Sinovac shot's ability to quell outbreaks requires the vast majority of people to be vaccinated, a scenario that developing countries with poor health infrastructure and limited access to shots cannot reach quickly. In the Indonesian health worker study, and another in a Brazilian town of 45,000 people called Serrana, nearly 100% of people studied were fully vaccinated, with serious illness and deaths dropping after they were inoculated.

In contrast, Chile saw a resurgent outbreak after vaccinating over a third of the population of 19 million -- one of the fastest rates in the world, but not fast enough to stop the spread of the aggressive variant sweeping Latin America.

"The earliest group of people vaccinated in Chile are old people. Less than 15 million of doses given to Chile means only 7 million people can get our shots. That equals to only 36% of a population of 19 million," said Yin. "It's normal that the country sees a resurgence of infections as social activities increase among the younger people who are mainly not inoculated."

Among people vaccinated with CoronaVac in Chile, 89% were protected from serious Covid that requires intensive care, said Yin.

The vaccine's protection is likely to vary from place to place due to virus variants, but Sinovac's shot appears to be holding up well against the new mutations of concern, he said.

A key question for all Covid vaccines is whether they can prevent or deter actual transmission of the virus. Yin said Tuesday that Sinovac does not yet know if its shot -- a traditional inactivated vaccine -- can stop or reduce the virus from being contracted in the first place, but the fact it is preventing serious illness and death is more important.

The mRNA shot developed by BioNTech SE and Pfizer Inc. has been shown to be over 90% effective in preventing transmission in Israel.

While non-mRNA vaccines are unlikely to be that effective in preventing transmission, the growing body of evidence that Sinovac's shot works is a boon to China's mission of supplying the developing world in a bid to increase its influence and standing. It's also somewhat of a vindication amid criticism that Chinese vaccine developers disclosed less data and were less transparent about severe adverse events compared with western companies.

"The results from real world application and the scientific data we have from clinical trials will allow the world to judge our vaccine comprehensively," said Yin. "We encourage our partners and governments in countries where our vaccine is being used to release such data as soon as possible."

Indonesia was one of the earliest countries to place its bets on a Chinese vaccine. In January, President Joko Widodo became the first major world leader to receive the Sinovac shot in a bid to quell skepticism at home and abroad. Since then, Southeast Asia's largest economy has administered more than 22 million doses, mostly Sinovac, as it seeks to reach herd immunity for its 270-million strong population by year-end.

"The minimum efficacy rate should be above 50%, so beyond that, the best vaccine is the one you can get as soon as possible, as every shot given can prevent deaths," Health Minister Sadikin said. "It isn't only about getting the highest efficacy rate, but inoculating people quickly."

While neighboring Malaysia and Thailand are seeing a resurgence in cases, Indonesia's rate of new infections and deaths has stabilized since a January peak. But with its massive population still mostly unprotected, the upcoming Eid holiday could cause cases to rebound by as much as 60% as people gather with family and travel home despite government restrictions, Sadikin warned.

Helen Petousis-Harris, a vaccinologist at the University of Auckland, said that the ability of vaccines to control a disease can be higher in the real world than when measured in clinical trials.

"In my experience, we often fail to predict the overall impact of vaccines, something that can only be seen in the real world after widespread use," she said. "Reducing the bulk of disease is not only essential to save lives but also to reduce the chances of problematic variants appearing."