It was a confusing announcement, as the two students thought administrators at Holy Cross High School - a Catholic school in Covington, Kentucky - had approved their speeches beforehand. 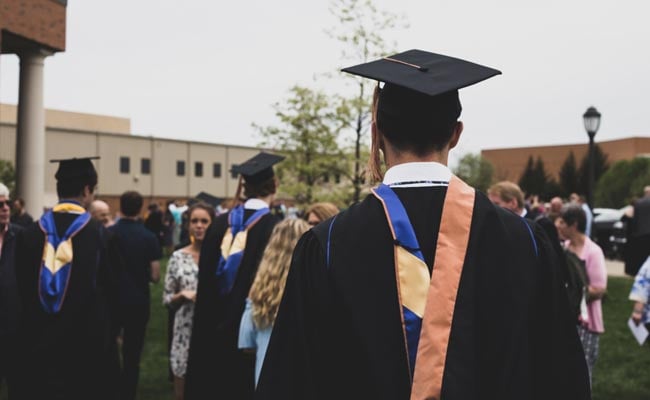 Christian Bales, 18, felt that his speech was indispensable (Representational)

The news came just hours before their high school graduation ceremony was set to begin: Valedictorian Christian Bales and student council president Katherine Frantz would not be able to give their speeches.

It was a confusing announcement, as the two students thought administrators at Holy Cross High School - a Catholic school in Covington, Kentucky - had approved their speeches beforehand. But in a phone call to the students' families on Friday morning, the school principal explained that in an "emergency meeting" the local diocese had deemed the students' speeches inappropriate. The diocese had felt that Bales' speech, in particular, was "aggressive, angry and confrontational," according to the Cincinnati news station WCPO.

Bales, 18, felt that his speech was indispensable. It addressed the importance of youth advocacy at a time when the nation has its eye on teenagers, such as the students at Marjory Stoneman Douglas High School, who have campaigned for stricter gun laws since a gunman opened fire on their Parkland, Florida, school in February, leaving 17 people dead. And it praised his fellow student activists across the political spectrum - from those who spoke out about the Parkland tragedy to those who participated in the antiabortion March for Life in January.

So Bales and Frantz, still hoping to impart their advice to the Class of 2018, delivered their speeches outside after the ceremony through a megaphone.

" 'The young people will win' is a mantra that I'm sure many of you have heard if you've been attentive to the media recently. It's a phrase adopted by the prolific Stoneman Douglas teenagers who are advocating for an agenda - our rights to feel secure as humans," Bales said through a megaphone on a grassy lawn to a group of cheering fellow graduates, according to a video obtained by WCPO.

"As we enter into the real world, we must remember that we have a voice," Bales said.

Bales went on to say that it's sometimes the young who are the wisest, as they have not been desensitized to the "atrocities of our world." Therefore, young people must "speak candidly about issues" and "mustn't tremble in the face of the institutions" that try to silence them, he said.

"We are dynamic. We are intelligent. We have a voice, and we're capable of using it in all communities," Bales said.

The Washington Post was unable to obtain a copy or recording of Frantz's speech and could not immediately reach her.

Diocese of Covington spokesman Tim Fitzgerald told WCPO that the speeches were "found to contain elements that were political and inconsistent with the teachings of the Catholic Church." He added that the students had not met the deadline for turning their speeches in to faculty.

Fitzgerald and Principal Mike Holtz could not be immediately reached for comment.

Bales said he believed that he and Frantz were treated unfairly because of their outspokenness on social issues.

"The president is my best friend, and we've been two huge advocates for social reform in our community, which has likely put us on the radar for the diocese," Bales told WCPO.

Bales' mother told WCPO that her family has been part of the diocese for years and that Holtz had never called her personally to talk about Bales until last week. An initial phone call, she said, was to ensure that Bales, who identifies as gender non-confirming, would wear men's clothes, formal shoes, a conservative hairstyle and no makeup to the graduation ceremony - as expected by diocesan officials.

Holtz's next phone call was regarding Bales' speech.

Marksberry said the staff of Holy Cross had been supportive of her son and so she did not harbor any negative feelings about the situation.

Bales plans to study biology at the University of Louisville on a full scholarship in the fall, according to WCPO. He hopes to become a conservationist.

Promoted
Listen to the latest songs, only on JioSaavn.com
"We must take what we've learned in this community and apply it to the world we are about to encounter," Bales said in closing his speech. " We are the young people, and we will continue to win."

(This story has not been edited by NDTV staff and is auto-generated from a syndicated feed.)
Comments
Christian BalesKatherine FrantzHoly Cross High School