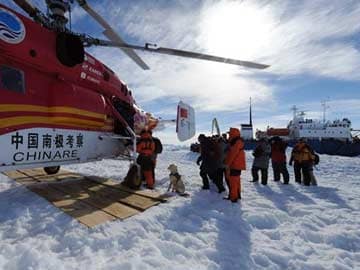 In this photo provided by China's official Xinhnua News Agency, passengers from the trapped Russian vessel, MV Akademik Shokalskiy, seen at right, prepare to board the Chinese helicopter Xueying 12 in the Antarctic

A Chinese icebreaker that went to the aid of a Russian ship stuck in heavy floes in Antarctica has now itself become trapped by ice, officials said Saturday, sparking anger about the impact of the rescue on polar expeditions.

The Xue Long, which on Thursday used its helicopter to ferry dozens of passengers on the stranded Russian ship Akademik Shokalskiy to the safety of an Australian vessel, has been unable to free itself, authorities said.

"Xue Long has confirmed to the Australian Maritime Safety Authority it is beset by ice," the authority said in a statement.

Speculation about whether the Xue Long was stuck had mounted for several days given the ship had hardly moved after its failed attempt to cut through the ice to reach the Shokalskiy.

By late Friday, Australian officials said the Xue Long, or Snow Dragon, had reported that it had concerns about the heavy ice that surrounded it and would attempt to free itself early Saturday.

AMSA said while this attempt had failed, the master of the Chinese ship had confirmed that the vessel was safe, was not in immediate distress and did not require assistance. The ship has food supplies for several weeks.

The Shokalskiy remains stuck in ice 100 nautical miles from the French Antarctic base of Dumont d'Urville with 22 crew on board.

Several attempts by icebreakers to reach the Russian ship failed, including by the Xue Long and the Australian Antarctic supply ship the Aurora Australis, while poor weather initially delayed helicopter rescue plans.

The 22 scientists, 26 paying passengers and four journalists on board the Shokalskiy who were helicoptered off the ship are now on the Aurora Australis, which had been asked to remain on standby in the area to help the Xue Long.

However, AMSA said Saturday the Aurora Australis was now free to continue its journey to Australia's Antarctic base Casey, where it is due to deliver supplies before heading to the Australian city of Hobart.

"The masters of both Akademik Shokalskiy and Xue Long agree that further assistance from Aurora Australis is no longer required and they will be able to provide mutual support to each other," AMSA said.

Australian authorities have said that any inquiry into how the Shokalskiy came to be stranded would have to be conducted by Russian authorities but have acknowledged that the incident could impact guidelines for polar expeditions.

The rescue mission, which also initially involved the French ship the Astrolabe, has also impacted some Antarctic research programmes, according to Yves Frenot, director of the French Polar Institute.

The rescue mission forced French scientists to scrap a two-week oceanographic campaign this month using the Astrolabe, he said.

"But we are relatively lucky. The Chinese have had to cancel all their scientific programme, and my counterpart in Australia is spitting tacks with anger, because their entire summer has been wiped out," he said.

The Aurora was forced to suspend its resupply of the Australian base to rush to the aid of the Shokalskiy, but authorities said it was not yet known what impact the incident would have on scientific programmes.

"We are working very hard to minimise the impacts and complete as much of the work programme of the Australian Antarctic programme as possible."

The trip on the Akademik Shokalskiy was aimed at emulating a 1911-1914 expedition by the Australian explorer, Sir Douglas Mawson and Frenot said "this kind of commemorative expedition has no interest from a scientific point of view".

The scientists onboard, assisted by the passengers, were repeating century-old measurements to discover the environmental changes taking place in the frozen southern region.

Promoted
Listen to the latest songs, only on JioSaavn.com
Their research was also looking at the circulation of the Southern Ocean and its impact on the global carbon cycle and looking at the sub-Antarctic islands as thermometers of climatic change by examining trees, peats and lakes.

The scientists were also examining penguin rookeries and seal populations and aimed to produce the first underwater surveys of life in the sub-Antarctic islands and Commonwealth Bay.